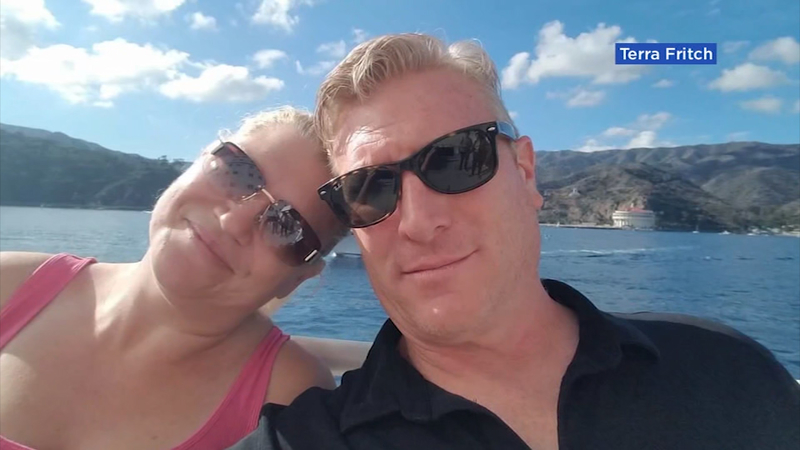 His widow spoke to ABC7 News about his dream to travel the world and their last moments together.

For the last five days, Terra has spent her time inside the tiki bar, holding on to the last memories of her husband of 19 years.

"He put in every single nail, every single screw," said Terra and added, "This was his labor of love. This is where I feel the closest to him. I'm just so thankful that I have it because he really, really loved this bar."

In their sanctuary, everything remains untouched.

"Everything that Alex has touched right now it's so important to me," said Terra.

Terra and Alex shared a passion for rum and dirt bikes.

The widow of San Jose shooting victim Lars Lane didn't give up hope that her husband of 22 years survived the deadly attack at the Valley Transit Authority railyard, until the very last second when she received the tragic news.

"When we met and I told him I ride dirt bikes he asked me, "Where do you ride?" she said. "Because depending on your answer it meant that you rode or you pretended that you rode."

Wearing Alex's wedding band, Terra shared their last memory together as she laid next him in the hospital seconds before he passed.

"He moved his wrist and grabbed my hand," said Terra and added, "He had tears coming out of both of his eyes and I felt him pass. I literally felt it. He didn't want to leave. He wanted to be here with me."

The "what if's" of that morning are keeping her awake at night, months earlier Alex had shared with his wife concerns about the suspect.

"He was off shift and he was taking in his hand radio. He was 5 feet away from the door. Away from this, and being home with me. That I think hurts more than anything. Because he was not supposed to be there. He got off at 6:30 a.m.," said Terra.

On Thursday their oldest son graduates high school, a week after Alex was killed. As he prepares to graduate, he's drafting letters for Gov. Gavin Newsom and President Joe Biden asking for change.

As they wait, they have the tiki bar with memories of Alex to hold on to. Terra looked up and saw "Chewy," the toy Alex use to hide for his friends to find. Today Terra was the one to find it.

"Chewy is above the bar right now in the fish net," she said. "And I don't think it'll ever move," said Terra.