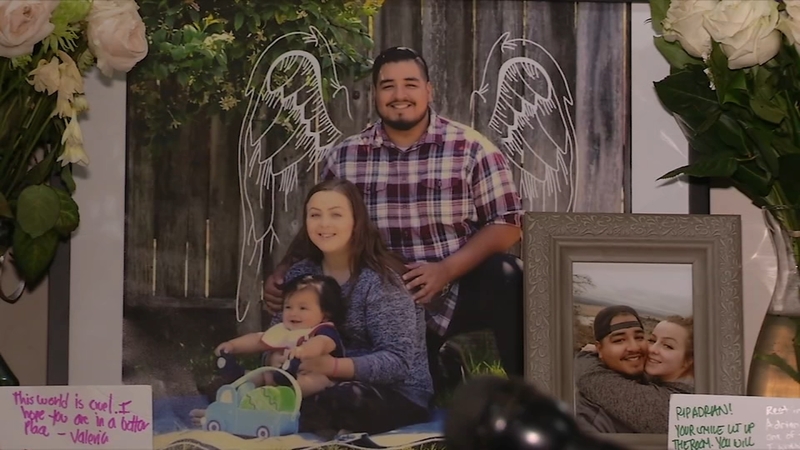 GILROY, Calif. -- Adrian Balleza, 29, was a father, husband, loved one and friend. Nearly a week after he was killed in the mass shooting at the VTA rail yard in San Jose, his family wanted to share his story.

His brother, Juan Balleza, told the story that his family hadn't even heard yet regarding the final moments before his brother's death.

"He would do anything for us," Balleza said. "He did everything he could for me, for my mother, for his niece and nephew. He did everything for his son. He was selfless and in this situation that happened, he demonstrated true bravery. He ultimately sacrificed himself for his co-workers and myself."

Juan worked with Adrian at VTA. The morning of the shooting, Juan said his brother called him to warn him of the shooter on the grounds.

After that, Juan said Adrian, along with Paul Mejia, rushed into a hallway to help prevent the shooter from entering a room that had more people in it.

"He said don't come to the yard and I heard gunshots shortly after that," Balleza said. "What I heard was a painful groan. It was him. He was hit. I heard him take his last breaths. His phone call saved my life. His bravery saved his friends. I will forever be grateful to my brother. He will always be my guardian angel."

Juan called his brother a hero and said his family will always remember his sacrifice.

Balleza's neighbor in Gilroy, Beatrice Trotter, said she texted him after learning news of the shooting, but never received a response. Balleza, his wife and his child visited the Trotter household often throughout their year-plus of living in the neighborhood for chats and a swim in the pool.

"I know that he was a Christian guy," Trotter said. "He loved his family, he loved his community and he was a people person. He loved his job and he loved meeting the people on the bus and just taking care of his customers. Whether it was just having conversations or providing support, mental health support to his riders. My heart goes out to his family and all the victims' families. Just know God and know that he left this earth being a good person."

"Adrian was loved," said his cousin Viviana Balleza. "And we can continue his legacy by being love."

Balleza started as a bus operator trainee in 2014. He later worked as a maintenance worker and light rail operator.

A GoFundMe page has been set up to support Balleza's wife and 2-year-old son.

Working Partnerships USA has set up a fund to help support the victims and their families of this tragic event. Head to this link to find out more information on how to donate.

In this first person account, we learned more about what may have led to the mass shooting in San Jose, and how the gunman chose his targets, leaving others to live.