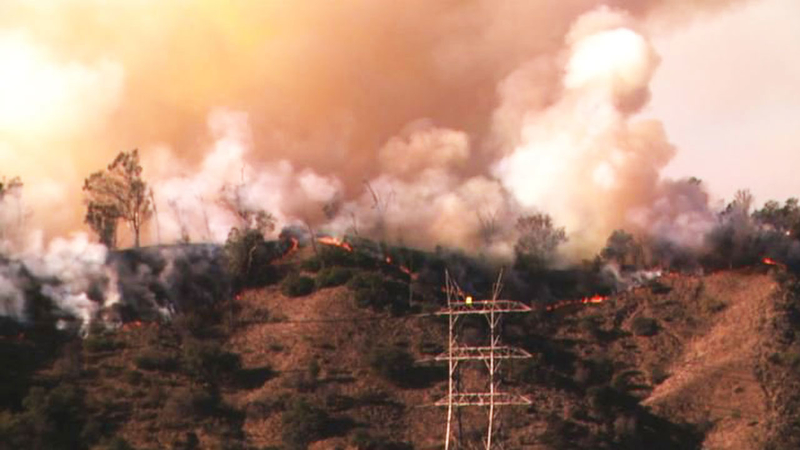 GRIFFITH PARK, LOS ANGELES (KABC) -- A small brush fire erupted near the Los Angeles Zoo in the Griffith Park area early Friday, prompting the closure of the popular tourist spot for the day.

The acreage of the fire was estimated to be about 30 acres after burning through heavy brush with "steep and very difficult" terrain, according to the Los Angeles Fire Department. The blaze was 60 percent contained as of Friday afternoon, and flames were no longer visible.

LAFD officials said one firefighter was transported to a nearby hospital with a non-life-threatening laceration injury.

LAFD officials said strong winds were not a factor in the firefight, which at one point involved more than 150 firefighters and two helicopters.

Incredible. There’s even a fire right outside our station. Fire seemingly all over LA. pic.twitter.com/Wwa8aC0ciZ

The popular L.A. Zoo was closed to the public for the day. Staff evacuated bird show animals and some smaller primates, the zoo said in a tweet, adding that it doesn't appear the fire's smoke is causing issues for other animals. The zoo later said no animals were harmed.

Staff evacuated bird show animals & some smaller primates. We turned on sprinklers & began hosing the hillside. It doesn't appear the smoke is causing issues for animals but staff is monitoring conditions. Given ltd access to Griffith Park the Zoo will be closed to public today.

Tall, white plumes of smoke were spotted behind the zoo when the blaze erupted.

View from my office. Hope everyone is being very careful this morning. #abc7eyewitness pic.twitter.com/FxUv0IJnMx

No structures were burned or damaged.