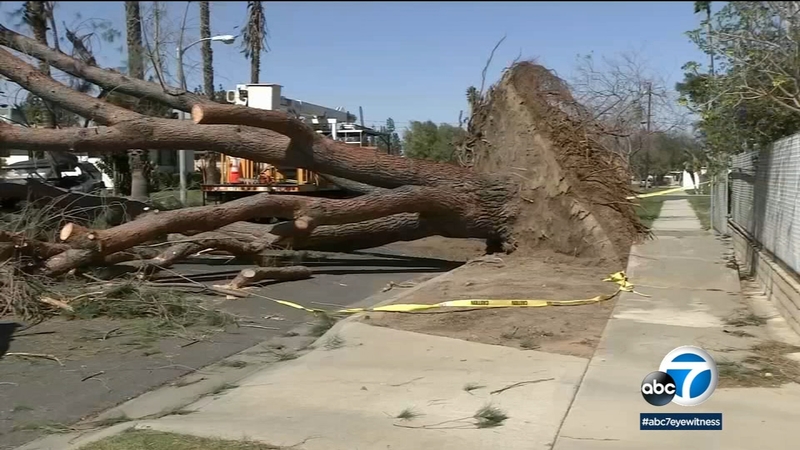 At least four big rigs were blown over in Fontana, about two overturned on the 15 Freeway and another two on the 210 Freeway, according to the California Highway Patrol.

Several other big rigs were seen parked on the side of the road apparently waiting for the winds to subside to make for better driving conditions.

The strong winds also made conditions difficult for firefighters battling a blaze that damaged at least three structures in the Bloomington area of San Bernardino County.

Strong winds made conditions difficult for firefighters battling a blaze that damaged at least three structures in the Bloomington area of San Bernardino County.

Over in Riverside, a large tree outside Susana Gonzalez's home, which stood there for more than two decades, was uprooted by the winds.

"It almost felt like a small earthquake. It shook the ground," Gonzales said.

Her neighbor's truck across the street was crushed under the weight of the tree.

"When we saw the roots, that was our first concern... did it get all the way to their house? So we came out to make sure and once we saw that it didn't...we were just relieved that they were okay," Gonzalez added.

The howling winds also managed to knock over a newly-installed concrete wall, bending rebar in the process.