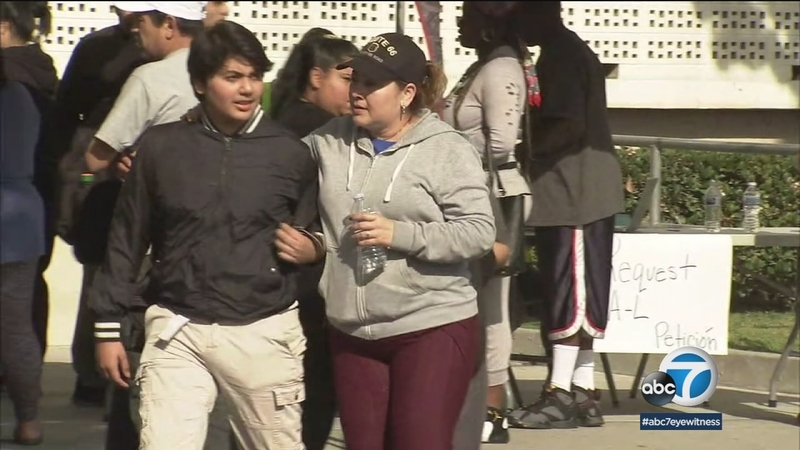 WESTLAKE DISTRICT, LOS ANGELES (KABC) -- A student who witnessed the aftermath of a shooting at a Los Angeles middle school frantically texted her mom, describing a gruesome and bloody scene.

Two 15-year-olds, a boy and a girl, were shot at Sal Castro Middle School Thursday morning. A 12-year-old girl was detained as a person of interest.

Ruth's daughter was not injured in the shooting, but it appears she witnessed some of the bloody aftermath. She told Eyewitness News that her daughter's initial text messages didn't make complete sense.

"She was texting me, 'Mom, this girl is bleeding, and her veins popped,'" Ruth recalled, saying she was confused and didn't quite know what to make of the message. She told her daughter to find someone to help her and perhaps put pressure on the wound.

Ruth's daughter then told her mom that the girl fainted on the floor, and a boy was now bleeding, too.

Ruth, who is pregnant, said she grew increasingly nervous and began to panic when she received her daughter's next text: "Mom I'm just scared. There's a boy bleeding from his nose."

A student who witnessed the aftermath of a shooting at a Los Angeles school frantically texted her mom, describing a gruesome and bloody scene.

Her daughter didn't mention a gun, so Ruth didn't know what was causing the bleeding.

"I started thinking, maybe there's a kid going with a blade? I just told her to stay in the back of the class," she said.

Ruth soon learned through family that there had been a shooting at the school.

"It was heartbreaking. I broke down at work," said Ruth, who left her work and made her way to the school as quickly as possible.

"I see it in the news, I see it in other states, but here in L.A., especially in a little public school, you wouldn't think it would happen, and it's happening...This is a shooting. It's not a game," she said.

Officials said a motive remains unknown, and it is unclear how the alleged shooter got a hold of a gun.

Parents were being reunited with their children at a baseball field near Sal Castro Middle School. Officials confirmed that although the campus was on lockdown for the time being, a normal school day was expected to resume.