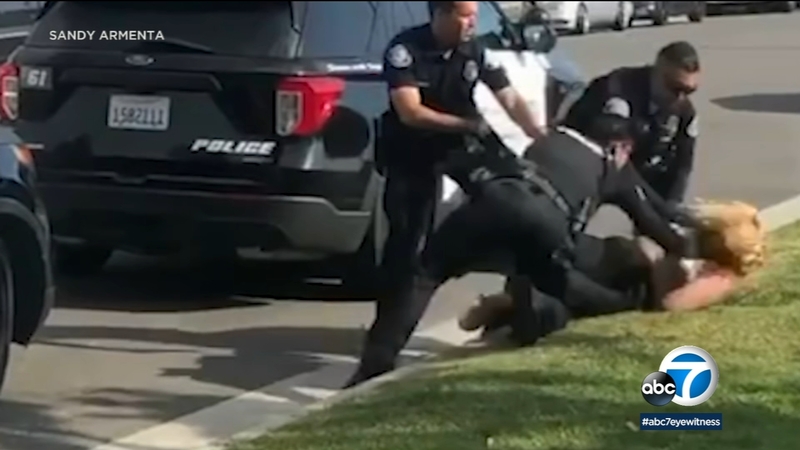 WESTMINSTER, Calif. (KABC) -- A Westminster police officer has been placed on paid administrative leave after video surfaced showing him punching a woman twice in the head as he struggled to subdue her during an arrest.

During the incident, two officers were trying to detain a woman who was accused of assault and believed to be under the influence of a controlled substance, with a third officer standing nearby.

As they stood her up from the curb she appeared to be struggling and fell to the ground. Her hands are cuffed behind her back but her legs are unrestrained and she appears to be kicking, possibly hitting one officer - and that officer then strikes her two times in the face with his fist.

The other two officers restrained him and he backed off as the two others worked to get the struggling woman under control.

The Westminster Police Department says the incident happened Wednesday around 4 p.m. in the 14100 block of Locust Street when police were called about an assault.

A Westminster police officer has been placed on paid administrative leave after video surfaced showing him hitting a woman twice in the face as she was struggling during an arrest.

The initial caller told police a woman had assaulted another woman who had been trying to rescue a dog running in the street.

The officers who responded found the suspect at the scene, later identified as Ciomara Garcia, 34, of Westminster.

They learned she was wanted on an outstanding felony bench warrant for vandalism. As they initially handcuffed her, they believed she was showing signs of being under the influence.

"They already know she has schizophrenia and she's bipolar, or at least one of the cops did," Rosales said.

"When we opened the door, they're trying to put handcuffs on her, and she was resisting," Rosales said. "They're walking her out, and when we got out of the walkway, that's when she started kicking their shins. That's when they threw her into the plants."

Doorbell video caught officers picking Garcia back up out of the flower bed and walking her toward the street.

As they were waiting for paramedics to arrive, police say Garcia "was not compliant and she became combative with the officers."

That was when the incident captured on video by a witness occurred.

The WPD said the Orange County District Attorney's Office "will evaluate the officer's use of force and determine if criminal charges are warranted."

After she was subdued, Garcia was taken to a nearby hospital for evaluation and later booked at Orange County Jail on the warrant.

The department says it will also ask the DA's Office to consider charges of assault and battery by Garcia on the original victim, as well as being under the influence of a controlled substance, resisting arrest and assault on a police officer.

Rosales said his sister has previously assaulted another woman, and in that instance, she had assaulted police.