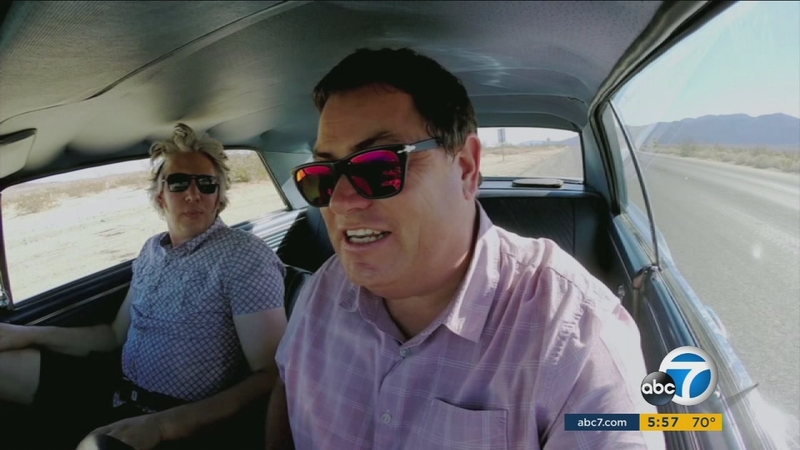 HUNTINGTON BEACH, Calif. (KABC) -- Lately, there's been a certain guy working on old cars in a Huntington Beach shop. Of course, that wouldn't seem to be unusual, but in this case it actually is. The guy doing the work is a mechanic named Edd China, who along with his partner Mike Brewer stars in the hit reality show "Wheeler Dealers."

The program started in England in 2003, and now has a worldwide audience of more than 200 million, including legions of fans here in the U.S.

China, Brewer and the production team for "Wheeler Dealers" recently made Orange County their second home out of a necessity to produce more episodes due to strong demand.

"If you're going to want more shows, we just can't physically make them during an English winter, we'll have to go somewhere sunny to make them," Brewer explained. "So we decided California it is."

Out of a quiet industrial park in a building you'd never give a second look to, Brewer finds cars in need of TLC, and China goes to work fixing them up, just like any enthusiast would do with the tools in his or her own garage.

"We are genuinely just two ordinary guys that love cars. We'll go through a magazine, go on the internet, find one, have a desire to own it, and have a desire to put that car back on the road," noted Brewer when asked about why the show has become so popular.

If you know anyone who has ever fixed up a classic car, you'll know they'll often give themselves a deadline to finish by. For the "Wheeler Dealers" hosts and crew, that deadline is a hard and fast one to get a car finished, sometimes right before airtime.

What helps in Southern California is that China has found that this is a great place to be in need of parts, like air conditioning pieces for the vintage Pontiac GTO he fixed up in their first U.S.-based episode.

"It turned out there was a place that had them on the shelf, literally 10 minutes from the shop," remarked China. "That would just never happen in the U.K."

The premise of the show is fairly simple and has remained the same over the past 13 years even though some of the projects have gotten more expensive and elaborate. Brewer negotiates with the seller of an old car to try to buy it as inexpensively as possible due to repairs it will need.

Once the car is in their workshop, China gets busy making the car more sellable. Back to Brewer, who advertises the car and sells it to a private buyer after a price is negotiated.

Unlike other car-themed reality shows, there is no staged drama, and no faked immediacy. The realness of the format and the two hosts is what keeps it relatable to average people who may be interested in a classic car.

"There are like 35 other car shows right now on the planet, and none of them actually do what we do, which is the hard bit," added China. "And that is to actually follow the detail, look at how things go together, how to fix stuff. And in in the end, get the 'every man' out into the garage."
Related topics:
automotivehuntington beachorange countycarclassic carsreality television
Copyright © 2021 KABC-TV. All Rights Reserved.
TOP STORIES
Vanessa Bryant said LA sheriff promised to secure crash site
Father of teen killed in drive-by begs for peace: 'Put the guns down'
Vigil planned in Burbank for cinematographer killed on NM movie set
Dodgers eliminated: Braves to face Houston Astros in World Series
SoCal weather: Cloudy Sunday before rain makes its way in on Monday
'Firestorm' tells Oakland Hills fire survivors' stories 30 years later
Triple shooting in DTLA leaves 1 dead, 2 injured
Show More
USC suspends individual after sex assault allegations involving frat
'Rust' film crew voiced complaints before fatal on-set shooting
101 Freeway: Closure near downtown LA continues amid viaduct project
Teen killed after fight breaks out at Halloween party, police say
Average SoCal gas prices rise to highest amount since October 2012
More TOP STORIES News