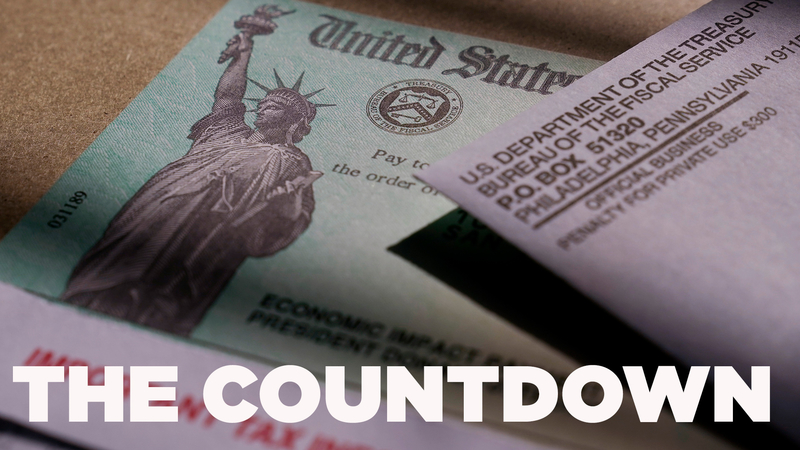 WASHINGTON -- The Senate on Thursday released its version of the Democrats' massive coronavirus relief package, after the House passed its package last week.

Lawmakers made several changes throughout the legislation, but two were particularly notable -- narrowing eligibility for the stimulus checks and nixing an increase in the federal minimum wage to $15 an hour.

Much of the Senate legislation, however, largely mirrors the $1.9 trillion package approved by the House and laid out by President Joe Biden in January.

Senate Democratic leaders have faced more hurdles to advancing the legislation since the party can't afford to lose a single member thanks to the 50-50 split in the chamber. Plus, they must adhere to the strict rules of reconciliation, which they are using to approve the bill without any Republican support.

Senate Majority Leader Chuck Schumer vowed Thursday to stay in session to finish the bill this week, though Republicans are trying to drag out the process. Once the chamber passes its version of the bill, it goes back to the House for a vote and then onto the White House for Biden's signature.

Time is of the essence. An estimated 11.4 million workers will lose their unemployment benefits between mid-March and mid-April unless Congress passes its next coronavirus relief package quickly, a recent study by The Century Foundation found.

White House press secretary Jen Psaki said Wednesday that President Joe Biden is "pleased" with negotiations about the American Rescue Plan. Biden and Democrats agreed Wednesday to tighten the upper income limits at which people could qualify for stimulus checks

Here's what's in the Senate bill:

The Senate bill amends the House bill on the $1,400-per-person stimulus payments to tighten eligibility.

The checks will phase out faster than previous rounds, completely cutting off individuals who earn more than $80,000 a year and married couples earning more than $160,000 -- regardless of how many children they have.

The bill passed by the House set the income caps at $200,000 for couples and $100,000 for individuals. The Senate change leaves out about 7 million families, according to an estimate from the Penn Wharton Budget Model.

Unlike the previous two rounds, adult dependents -- including college students -- are expected to be eligible for the payments.

The last-minute agreement would also make the first $10,200 worth of benefits payments tax-free.

This is a significant change from the House bill, which would provide a $400 weekly enhancement through August 29 and continue the two pandemic programs for the same period. The House bill does not contain the tax provision.

The Pandemic Unemployment Assistance program provides benefits to freelancers, gig workers, independent contractors and certain people affected by the pandemic, while the Pandemic Emergency Unemployment Compensation program increases the duration of payments for those in the traditional state unemployment system.

The President's plan had called for providing a $400 boost and continuing the benefits through the end of September.

Out-of-work Americans will start running out of benefits in the two programs in mid-March, when provisions in December's $900 billion relief package begin phasing out. The $300 enhancement that was part of the December deal also ends in mid-March.

What's riding on this negotiation is the $1,400 stimulus checks proposed by Pres. Joe Biden, but could this be the final round?

The Senate bill will not include an increase in the federal minimum wage, which House Democrats proposed raising to $15 an hour.

The parliamentarian ruled in late February that increasing the hourly threshold does not meet a strict set of guidelines needed to move forward in the reconciliation process, which would allow Senate Democrats to pass the relief bill with a simple majority and no Republican votes.

Aid to states and municipalities

The Senate and House differ on how much aid they would provide to counties and cities, but both chambers contain the same infusion of funding for states, tribes and territories.

The bills would provide states and the District of Columbia with $195.3 billion, but counties and cities would share $120 billion in aid in the Senate bill, $10 billion less than in the House version.

Tribes would get $20 billion and territories $4.5 billion under both bills.

The Senate version of the bill also slightly revises the formula to help states with smaller populations and boost the minimum they will receive. And it contains a $10 billion Coronavirus Capital Projects Fund for states, territories and tribes.

Overall, both bills would funnel a total of $350 billion to states and municipalities.

Additional assistance to states has been among the most controversial elements of the congressional rescue packages, with Democrats looking to add to the $150 billion in the March legislation and Republicans resisting such efforts. The December package ultimately dropped an initial call to include $160 billion.

The Senate and House plans both extend the 15% increase in food stamp benefits through September, instead of having it expire at the end of June.

They also contain $880 million for the Special Supplemental Nutrition Program for Women, Infants, and Children, known as WIC, to help increase participation and temporarily improve benefits, among other measures. Biden called for investing $3 billion in the program.

And they would allow states to continue the Pandemic-EBT, which provides families whose children's schools are closed with funding to replace free- and reduced-price meals the kids would have received, through the summer.

Both bills would send roughly $20 billion to state and local governments to help low-income households cover back rent, rent assistance and utility bills.

About $10 billion would be authorized to help struggling homeowners pay their mortgages, utilities and property taxes.

The bills would provide $5 billion to help states and localities assist those at risk of experiencing homelessness and another $5 billion for emergency housing vouchers for those who are homeless.

President Joe Biden encourages lawmakers to act "decisively, quickly and boldly" after the COVID-19 relief bill passed in the House.

Tax credits for families and workers

Both the House and Senate legislation beef up tax credits for families and certain low-income workers for 2021.

The credit would also become fully refundable so more low-income parents could take advantage of it. Plus, families could receive payments monthly, rather than a lump sum once a year, which would make it easier for them to pay the bills.

The bills also enhance the earned income tax credit for workers without children by nearly tripling the maximum credit and extending eligibility to more people. The minimum age to claim the childless credit would be reduced to 19, from 25, and the upper age limit would be eliminated.

This would be the largest expansion to earned income tax credit since 2009.

Unlike Biden's initial proposal, neither bill would reinstate mandatory paid family and sick leave approved in a previous Covid relief package. But they continue to provide tax credits to employers who voluntarily choose to offer the benefit through October 1.

Last year, Congress guaranteed many workers two weeks pay if they contracted Covid or were quarantining. It also provided an additional 10 weeks of paid family leave to those who were staying home with kids whose schools were closed. Those benefits expired in December.

Both the Senate and House bills would provide nearly $130 billion to K-12 schools to help students return to the classroom. Schools would be allowed to use the money to update their ventilation systems, reduce class sizes to help implement social distancing, buy personal protective equipment and hire support staff. Both bills would require that schools use at least 20% of the money to address learning loss by providing extended days or summer school, for example.

While the money provided by the House bill would go to both public and private schools, based on the number of low-income students enrolled, the Senate bill specifically carves out about $2.75 billion for private schools.

The bills are in line with what Biden proposed, but call for more than six times the amount of funding for K-12 schools than a compromise plan offered by a small group of Republican senators.

The Senate and House plans both include nearly $40 billion for colleges.

Altogether, $170 billion would be authorized for K-12 schools and higher education. Last year, Congress approved a total of $112 billion between two relief packages that went to K-12 schools and colleges.

The bills would also provide about $39 billion to child care providers. The amount a provider receives would be based on operating expenses and is available to pay employees and rent, help families struggling to pay the cost, and purchase personal protective equipment and other supplies.

Both the Senate and House bills would make federal premium subsidies for Affordable Care Act policies more generous and would eliminate the maximum income cap for two years.

In addition, the bills would bolster subsidies for lower-income enrollees, eliminating their premiums completely, and would do the same for those collecting unemployment benefits in 2021.

But the Senate bill provides more assistance than the House version to those who were laid off but want to remain on their employer health insurance plans through COBRA. The Senate calls for picking up the full amount of the premium, while the House would only cover 85%, leaving the former employee to pay 15%.

Both chambers would extend these subsidies through September.

Also, the Senate retains the House provision that seeks to entice states that have yet to expand Medicaid to low-income adults to do so by boosting their federal Medicaid matching funds by 5 percentage points for two years.

Both bills would provide $15 billion to the Emergency Injury Disaster Loan program, which provides long-term, low-interest loans from the Small Business Administration. Severely impacted small businesses with fewer than 10 workers will be given priority for some of the money.

They also provide $25 billion for a new grant program specifically for bars and restaurants. Eligible businesses may receive up to $10 million and can use the money for a variety of expenses, including payroll, mortgage and rent, utilities and food and beverages.

The Paycheck Protection Program, which is currently taking applications for second-round loans, would get an additional $7 billion and the bills would make more non-profit organizations eligible.

Another $175 million would be used for outreach and promotion, creating a Community Navigator Program to help target eligible businesses.

The Senate and House legislation also provide $50 billion to the Federal Emergency Management Agency, with some of the funds going toward expanding vaccination efforts.

The President's plan called for investing $20 billion in a national vaccination program.

The House bill did not provide any additional funding for hospitals or nursing homes, which received assistance in previous relief packages.