Which US states require masks and which 4 don't at all? 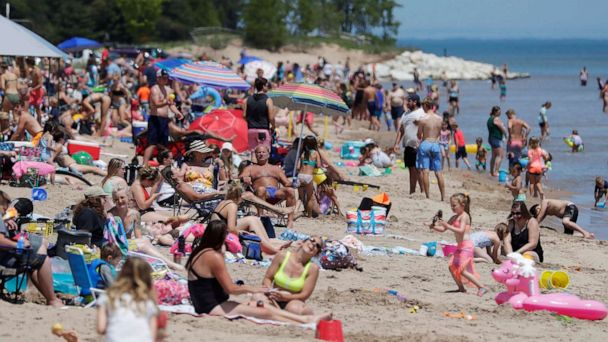 While the majority of Americans say they are wearing masks when they go out in public, some states have taken more stringent measures to ensure that's the case during the coronavirus pandemic.

Of the 50 states, 46 either require masks to be worn statewide or have some sort of requirement in certain locales, according to Masks4All, a volunteer organization that advocates for more mask-wearing.


The most strict mask requirement involves citizens wearing a mask outside at all times when social distancing isn't possible, with an emphasis on grocery stores and public transportation. Eighteen states, and Puerto Rico and Washington, D.C., fall under this category.

More lenient requirements require that only employees - not patrons-of businesses that are open wear masks indoors.

Four states - Iowa, Montana, Wisconsin, South Dakota - have no mask requirements at all.

Studies have proved the efficacy of masks.

One study published in The Lancet, a peer-reviewed medical journal, found that wearing a mask may drop the risk of transmission from 17% to 3%.


Multilayer masks were found to have offered better protection than single-layer masks for the general public.

The study looked at prior research on transmission of COVID-19 and related coronaviruses like SARS and MERS.

Masks' effectiveness was also proven after protests against police brutality erupted across the U.S.

Despite a concern that the protests may lead to a rise in cases, health officials and governors in some states have said that wasn't the case, noting that many protesters were wearing masks.

In Minnesota, an official for the Department of Health told ABC News that he attributes the low infection rate to "the fact that many or most protesters were wearing masks, the events were outside, people were often able to maintain a six-foot distance, and any exposures were of relatively shorter duration."


Massachusetts Gov. Charlie Baker similarly said that the positive rate for COVID-19 among protesters who got tested was consistent with the daily state figure-in other words, the same as for non-protestors.

The "vast majority of the folks who participated in those demonstrations were wearing masks or face coverings in one kind or another. In many cases they were moving, which I think made a big difference, and of course they all took place outside," Baker said.

The majority of people in the U.S. wearing masks has increased as the pandemic has gone on.

Nearly nine in 10 Americans who left their home in the last week said they wore a face mask or face covering, compared with only 1% who said they did not, a new ABC News/Ipsos poll found.