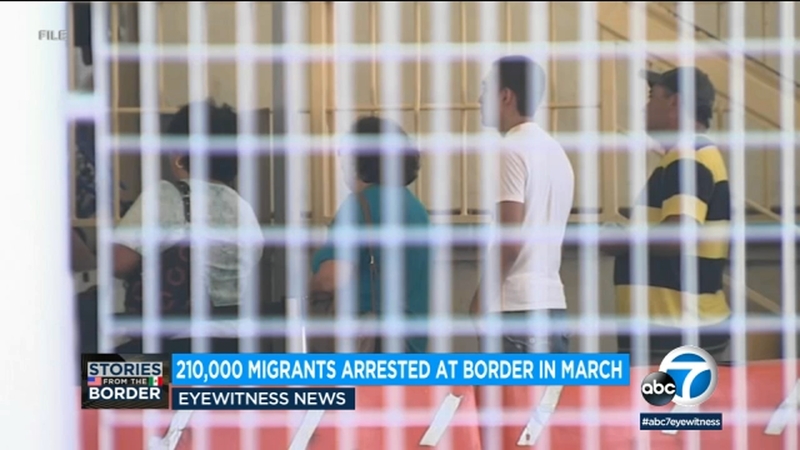 White House officials are increasingly anxious about an expected migrant surge at the end of May coinciding with the repeal of a restrictive Trump-era border policy that has let them turn people away.

The political fallout over the Biden administration's decision to terminate a Trump-era pandemic restriction, known as Title 42, on the U.S.-Mexico border has put into sharp focus the precarious position for the White House -- between its goals to welcome immigrants and weighing using drastic Trump-era policies to try to stem the flow of migrants arriving at the border.

"People are worried about where this is going and weathering the storm," a source familiar with discussions told CNN.

One source who is in regular contact with senior-most administration officials about immigration policy said concern at the White House about the situation at the border has only grown as the midterm elections approach -- and all the more so in recent days after the announcement that Title 42 will officially end in May.

"It was always going to be hard," the person said, "and now they're closer to the midterms."

Another source close to the White House described a "high level of apprehension" in recent weeks.

"They watch the border numbers every day," the person said. "They're very aware of what the situation is at the border."

White House chief of staff Ron Klain and President Joe Biden's domestic policy adviser Susan Rice -- two powerful political voices in the administration -- are among the top administration officials who have been intimately involved in discussing the situation.

A group of Orange County moms headed to the U.S.-Mexico border to help give humanitarian aid to Ukrainian refugees.

Issues related to the U.S.-Mexico border and the entry of migrants into the country have long been politically fraught for both Republican and Democratic administrations.

Biden, who campaigned against Trump-era immigration policies, has received heated criticism from Republicans for his handling of border enforcement. But he's also faced pushback from inside his own party for continuing to implement some of his predecessor's policies that are unpopular with progressives.

White House press secretary Jen Psaki highlighted the administration's plans in a Thursday press briefing, saying: "I would note the Department of Homeland Security also put together a preparedness plan to continue addressing irregular migration that involves surging personnel and resources to the border, improving border processing, implementing mitigation measures and working with other countries in the hemisphere to manage migration."

In the span of a year, Biden has already grappled with a record number of unaccompanied migrant children at the U.S. southern border and thousands of primarily Haitian migrants who camped in deplorable conditions under a bridge in Del Rio, Texas. Those incidents, which were used as fodder for Republicans looking to criticize the administration, are still fresh on the minds of officials bracing for busy weeks ahead.

Avoiding that, though, might include the continued use of policies the administration has repeatedly criticized, like the Trump-era "remain in Mexico" policy that requires non-Mexican migrants to stay in Mexico until their U.S. immigration court date. The policy, which restarted late last year after a court ruling, marked an unprecedented departure from previous protocols. Even so, the end of one Trump-era policy may give way to another growing in numbers.

"We will employ much greater numbers post-Title 42," a Homeland Security official recently told reporters, referring to the "remain in Mexico" policy, which is formally called Migrant Protection Protocols.

"We are under a court order to reimplement MPP in good faith and as part of those good faith efforts, we have been systematically increasing our enrollment under MPP," the official added.

The Department of Homeland Security has twice issued a memo trying to terminate the "remain in Mexico" policy, outlining its shortcomings and arguing it puts migrants in harm's way, but the court ruling forced the administration to restart the policy. The administration is appealing the ruling.

Immigrant families living in Southern California brought bouquets of flowers to greet their loved ones who arrived from Mexico.

As of April 3, nearly 2,000 people have been sent back to Mexico under the policy, according to the International Organization for Migration. That number is expected to grow, though given long-processing times and numerous other safeguards the administration has tried to implement, it's unlikely to expand enough to stem the flow of migrants.

Still, Republicans and some Democrats have expressed concern over the U.S. Centers for Disease Control and Prevention's decision to revoke Title 42 next month, arguing that it's a reckless decision amid pent-up demand to come to the US among migrants who are facing deteriorating conditions at home.

Intelligence assessments have found that people are in a "wait and see" mode and trying to determine when they have the best likelihood of entry into the US, according to a federal law enforcement official, adding that some of the 30,000 to 60,000 people could seek entry within hours if the CDC rule is repealed.

The White House has held interagency meetings about the intelligence and the situation more broadly, the official said.

By pulling back Title 42, the administration is returning to the usual operating procedures that have been in place for decades for processing migrants. That includes releasing migrants who claim asylum into the U.S., sometimes under an alternative form of detention, or detaining migrants and deporting them back to their home country.

But given conditions in Latin America, which was hit particularly hard by the coronavirus pandemic, more migrants may want to journey to the U.S. southern border.

"As a result of the CDC's termination of its Title 42 public health order, we will likely face an increase in encounters above the current high levels. There are a significant number of individuals who were unable to access the asylum system for the past two years, and who may decide that now is the time to come," U.S. Customs and Border Protection Commissioner Chris Magnus said in a statement.

The Department of Homeland Security released detailed plans for varying scenarios that could unfold at the U.S.-Mexico border in the coming weeks.

RELATED | When Title 42 is lifted, a years-long backlog of refugee cases remains at border in Tijuana
EMBED More News Videos

Next month, the Biden administration plans to lift Trump-era pandemic restrictions that blocked migrants from entering the U.S. Immigrant rights advocates are concerned about what happens when that goes away.

The Department of Homeland Security has set up a "Southwest Border Coordination Center" to coordinate a response to a potential surge among federal agencies. Homeland Security Secretary Alejandro Mayorkas appointed FEMA Region 3's regional administrator, MaryAnn Tierney, in March to head the center.

As part of the preparation, CBP has deployed 400 agents from other parts of the U.S. border to assist operations on the southern border, increased number of Immigration and Customs Enforcement personnel to assist in processing migrants, called on volunteers in the DHS workforce, and contracted to move thousands of migrants if need be.

CBP is also preparing to add new temporary facilities to alleviate any overcrowding. According to the DHS planning document, CBP holding facilities can hold over 16,000 migrants and expand to 17,000 with additional facilities opening in early April. Existing contracts can also be expanded to meet needs if there are up to 30,000 migrants in custody in a worst-case scenario.

But despite those plans, some Democrats are wary about moving forward with a return to the usual protocols on the border. Georgia Democratic Sen. Raphael Warnock, who is up for reelection, doubled down on his opposition to reversing Title 42.

"Senator Warnock believes in protecting the humanity of migrants at the border, but before this policy is rescinded, the Administration should present a plan for how it will ensure our border security has the manpower, infrastructure, humanitarian and legal resources they need to prevent this policy change from making an already dire humanitarian situation worse," a spokesperson for Warnock said in a statement.