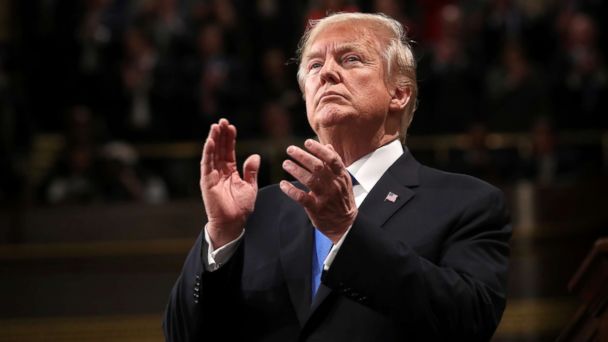 Despite the potential for another government shutdown and President Donald Trump's threat to declare a national emergency, the White House said Friday that his State of the Union address on Tuesday will take an optimistic tone -- presenting "an inspiring vision of American greatness" and a call for bipartisanship in a divided Congress.

A senior administration official told reporters the speech is titled "Choosing Greatness" and outlined five themes that the president is expected to zero in on during the speech; including immigration, trade, infrastructure, health care and protecting America's national security.

The official said the president will also specifically address the situation in Venezuela, where the United States has backed an opposition government seeking to overthrow the country's President Nicolas Maduro.

He is also expected to speak about abortion in the speech following outrage among pro-life advocates over comments by North Carolina Gov. Ralph Northam last week.

Trump has also suggested he might use the occasion to make news on his upcoming second summit with North Korean leader Kim Jong Un and he told reporters at the White House on Friday to "listen closely" for news about his continued fight to build a wall on the southern border.

The White House provided the first early excerpt from the speech to reporters, though an official noted the president and his team continue to make tweaks leading up to the day the speech is delivered.

"Together we can break decades of political stalemate, we can bridge old divisions, heal old wounds, build new coalitions, forge new solutions and unlock the extraordinary promise of America's future," the president will say, according to the excerpt. "The decision is ours to make."

Though the excerpt suggests the likelihood for a verbal, symbolic olive branch to House Speaker Nancy Pelosi and the new Democratic House majority, it's unclear whether the president will present any new positions in terms of compromising on contentious issues like immigration and health care.

He's likely to face an icy reception from many members in the chamber, after saying on Twitter Thursday that the Democrats "are becoming the Party of late-term abortion, high taxes, Open Borders and Crime!"

Speaking to reporters Friday, Trump all but dismissed any hope of compromise on ongoing bipartisan border negotiations and said there's a "good chance" he declares a national emergency to use Pentagon funds to build his border wall, which Pelosi has said would likely trigger an immediate legal battle.

Asked if he would use the speech to officially declare an emergency, President Trump answered, "I don't want to say."

Trump on Thursday told reporters that "unification" will be the main theme of the speech, and said he respects Stacey Abrams, who will be delivering the response to the president's address on behalf of the Democratic party.

For those looking to tune on Tuesday evening, the official said the speech's length will be comparable to last year's State of the Union, which was just nine minutes shy of setting a record as the longest in history.
Report a correction or typo
Related topics:
abc newsnational
Copyright © 2020 ABC News Internet Ventures.
More Videos
From CNN Newsource affiliates
TOP STORIES