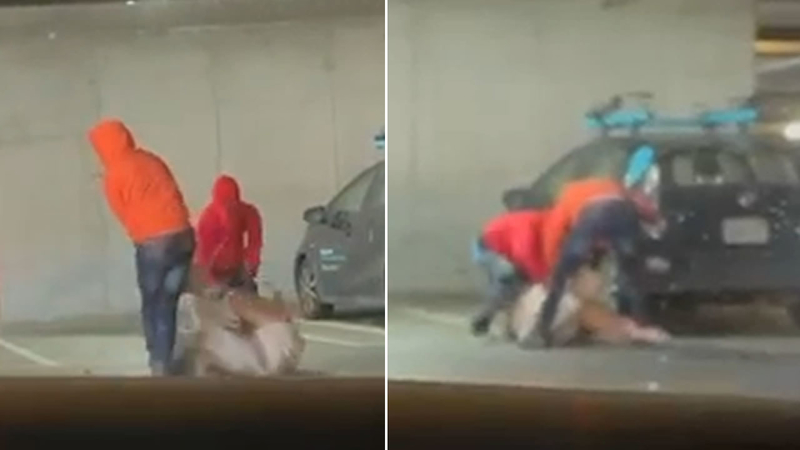 EMERYVILLE, Calif. -- Horrifying witness video shows an out-of-state tourist being attacked and dragged on the ground as part of a carjacking at a Bay Area mall.

The woman, who does not want to be identified, was visiting the Bay Street mall in Emeryville with a friend who wanted to return a pair of jeans. As soon as they parked in the garage Monday afternoon the attack began.

She shared the terrifying ordeal with ABC7's sister station, KGO in San Francisco.

"They were kicking me and punching me," said the woman, who can be heard in the video screaming repeatedly at the assailants.

"Two men just ran out and went towards me. It felt so fast like I just closed my eyes and opened it and the car was gone, everything was gone."

The woman explained she thought she and her friend were about to be kidnapped but her friend who was driving their rental car managed to kick her attacker and run away.

"It didn't register in my mind it was a robbery."

What was left: two black eyes, and both women bruised and shaken, but grateful to be alive.

"Very lucky," said the woman, as she pointed out her injuries.

Emeryville police reports indicate that since May there have been at least three robbery and carjacking victims in the Bay Street parking garage. There were also a number of armed thefts at various stores like Victoria's Secret, Uniqlo and Lenscrafters.

Upon learning of recent crime in the area, the victim in the video questioned how further incidents could be prevented.

"If it happened multiple times the mall should do a bit more to do make sure people feel secure, safe when they go shopping."

KGO reached out to the Bay Street's property manager but did not receive a response back in time for deadline.

The woman in the video hopes by speaking out, it can help catch her perpetrators and serve as a warning, as well as a "thank you" to the couple who recorded the video of her attack and stayed with her until police arrived.

"I think this could have happened to anyone. If it wasn't us it would have been someone else," she said.

No suspects have been arrested. Emeryville police ask anyone with information to call Detective John Corcoran at (510) 596-3734.