Woman, 72, gored by bison at Yellowstone National Park while trying to take picture

A 72-year-old California woman was gored by a bison in Yellowstone National Park, a news release from the park said.
CNNWire
By Dave Alsup and Hollie Silverman, CNN 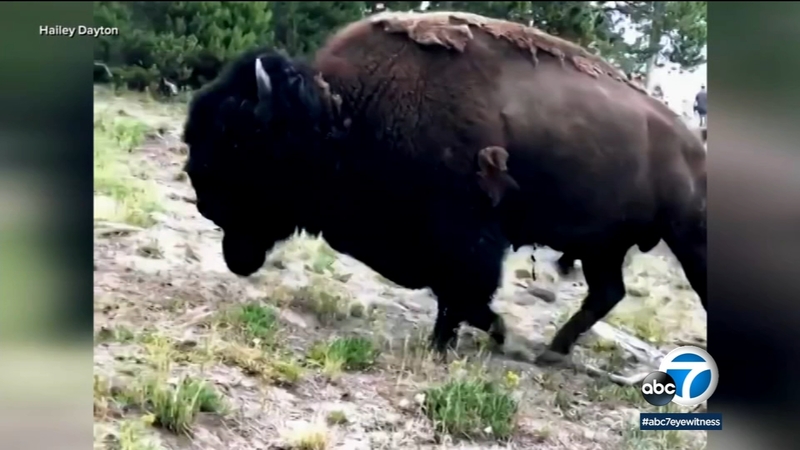 CA woman, 72, gored by bison at Yellowstone while trying to take photo

A 72-year-old California woman was gored by a bison in Yellowstone National Park, a news release from the park said.

The woman approached the bison to take a picture and got within 10 feet of it multiple times before it gored her on June 25, according to the release.

She sustained multiple goring wounds and was treated by rangers before being flown to an area medical center for further treatment.

The news release said the woman approached the bison several times near her campsite at Bridge Bay Campground in northwest Wyoming before the bison charged.

"The series of events that led to the goring suggest the bison was threatened by being repeatedly approached to within 10 feet," Yellowstone's senior bison biologist Chris Geremia said in the release.

"Bison are wild animals that respond to threats by displaying aggressive behaviors like pawing the ground, snorting, bobbing their head, bellowing, and raising their tail. If that doesn't make the threat (in this instance it was a person) move away, a threatened bison may charge," Geremia added. "To be safe around bison, stay at least 25 yards away, move away if they approach, and run away or find cover if they charge."

The attack serves as a reminder that "wildlife in Yellowstone National Park are wild," the release said.

Park visitors must stay 25 yards away from all large animals in the park including bison, elk, bighorn sheep, deer, moose and coyotes, the release said. If people encounter bears and wolves they should stay 100 yards away.

Another woman was also gored at the park in late May only days after the park reopened to visitors following a closure for coronavirus.