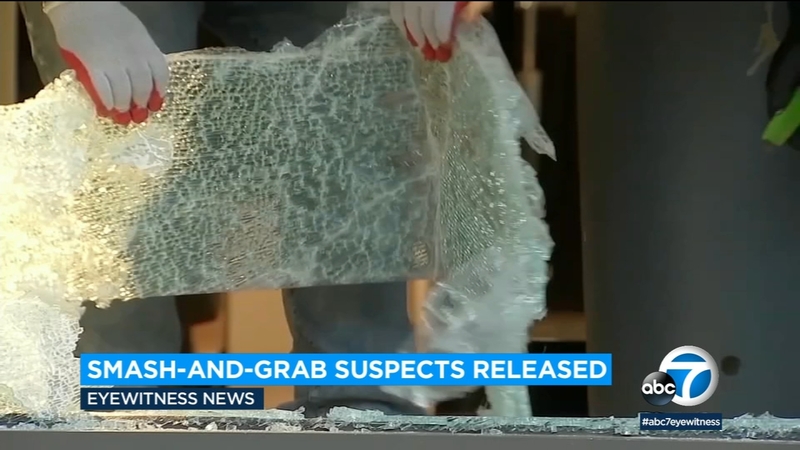 LOS ANGELES (KABC) -- Los Angeles police recently announced the arrests of 14 suspects in a series of smash-and-grab robberies across the city.

And not one of them spent more than a day in jail.

Zero-bail policies meant the suspects were quickly released from custody after they were arrested and booked for the crimes. One was a juvenile. All remain free while awaiting their court cases to work through the system.

Los Angeles Police Department Chief Michel Moore says city businesses were hit with a a spree of 11 smash-and-grab robberies over a span of 10 days in November. About $338,000 in property was stolen, as well as $40,000 in damage incurred by the stores.

Moore points the finger at the current zero-bail policy, designed to reduce jail populations during the pandemic.

Moore says auto thefts have been up for the past two years - the first rise, he says, in decades.

And Mayor Eric Garcetti says violent crime has crept up 3.5% this year.

He says the criminal justice system and judges need to scale back the zero-bail policy.

"There are people who need to be behind bars," Garcetti said. "We have opened up a lot of the city because we're in a better place with COVID. We should be able to also open up our jails and we should be able to have judges that put people behind those bars as well."

Over the past year, Los Angeles County District Attorney George Gascon has been a lightning rod for criticism. His attempts to reform the criminal justice system have sparked complaints of reduced sentences and a "light on crime" approach.

But the zero-bail policies were put into effect before Gascon even took office. At Thursday's news conference, both Garcetti and Moore said Gascon's policies are not to blame here.

"The vast majority of crime is committed by relatively few people," Moore said. "And when the few people are constantly gaming the system to understand its weaknesses, the system needs to protect all communities from those individuals."