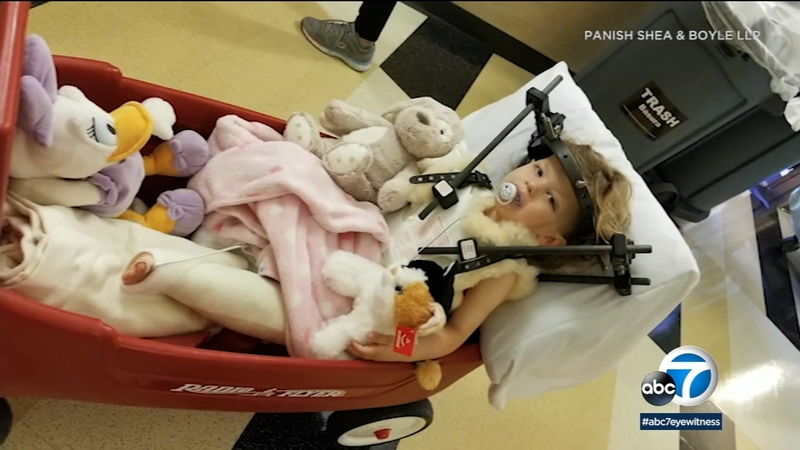 PASADENA, Calif. (KABC) -- A Southern California family is speaking out, saying the accident that left their toddler with a fractured skull never had to happen.

The accident happened when Eric and Marci Palmstrom had dropped off their daughter, Adelaide, at Linda Vista Children's Center in Pasadena. Hours later they got a call.

A tree limb had fallen on Adelaide while she played in the yard of the day care.

Her skull was fractured. Her neck, spine and leg were also broken and she had internal bleeding.

"How does something like this happen? You drop your child off at day care, and you expect to pick them up same way you dropped them off," Marci Palmstrom said.

The accident happened in 2017. The road to recovery would be long and arduous for Adelaide. One week in a hospital, two months in a heavy, cumbersome halo held in place with screws. Adelaide was requiring round-the-clock care.

"The both of us had to stop working to care for her 24/7," Marci Palmstrom said. "She was in pain. She was upset. She was sad."

It would be more than two years before Adelaide's last skull wound from one of those screws would heal. And the family's attorney says the entire ordeal was preventable.

"This was something that they knew or should have known was going to happen," said Robert Glassman, an attorney with Panish Shea & Boyle.

The Palmstroms hired Glassman and filed a lawsuit. Glassman says 16 months before Adelaide's accident, the preschool, the city and the school district all knew that falling eucalyptus tree branches in the park adjacent to the day care posed a danger to children.

Two days after the incident, the city posted notices and removed the trees from Linda Vista Park.

Three months ago, a two-year-long, hard-fought lawsuit ended in a $7.3 million settlement.

"I think everyone did take responsibility and they're going to make sure that this doesn't happen again," Glassman said.

Adelaide has made a remarkable recovery, but if you ask her parents, no amount of money is worth the pain and suffering she endured nor the challenges she may still face years ahead.

"Knowing that there was something that could have been done about it... is horrendous," Marci Palmstrom said.