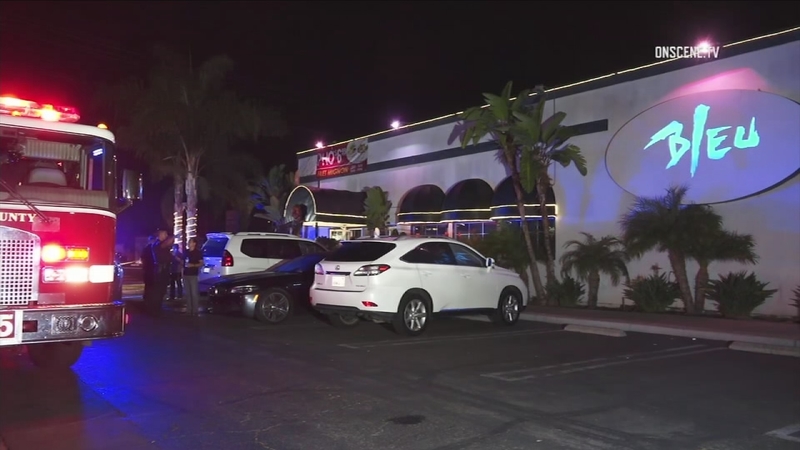 WESTMINSTER, Calif. (KABC) -- One person died and another was injured after shots rang out at a Halloween party in a nightclub in Westminster, police said.

Westminster police said the gunman is still at large after two people were shot at Bleu XO Lounge in the 14100 block of Beach Boulevard shortly after 1 a.m. Saturday.

About 100 people were inside the nightclub when the victims were shot and transported to area hospitals, where one later died. The second gunshot victim was expected to be OK, police said.

Kelvin Nguyen witnessed the chaos. He's lived in the area for 15 years and said he cannot believe what happened.

"I've never heard of anything like that before. This place is a gathering place where people have drinks and cocktails and things like that. So every now and then there are rowdy situations happening, there are fights happening...but never anything like a shooting," he said.

He added he has been to the place many times and it's usually heavily populated by the Asian community.

It was not immediately clear whether the shooting occurred inside or outside the nightclub.

The club was about to close at the time of the gunfire, and partygoers dressed in Halloween costumes were in and around the place at the time. When police responded, they immediately began interviewing anyone who they thought might lead them to the shooter.

"We evacuated all the people on the inside as well as numerous people on the outside and conducted numerous interviews," said Cpl. Andrew Stowers of the Westminster PD.

Investigators did not immediately provide a description of the suspect but added that they were looking into surveillance footage in the area for more information.

Authorities are looking into whether the shooting was gang related and hope security footage can lead them to the shooter.
Report a correction or typo
Related topics:
westminsterorange countynightclubgun violenceshootingman killed
Copyright © 2021 KABC-TV. All Rights Reserved.
More Videos
From CNN Newsource affiliates
TOP STORIES