The 101 Freeway was blocked and shut down in the Hollywood area by protesters Saturday night.
KABC
By Amy Powell and ABC7.com staff 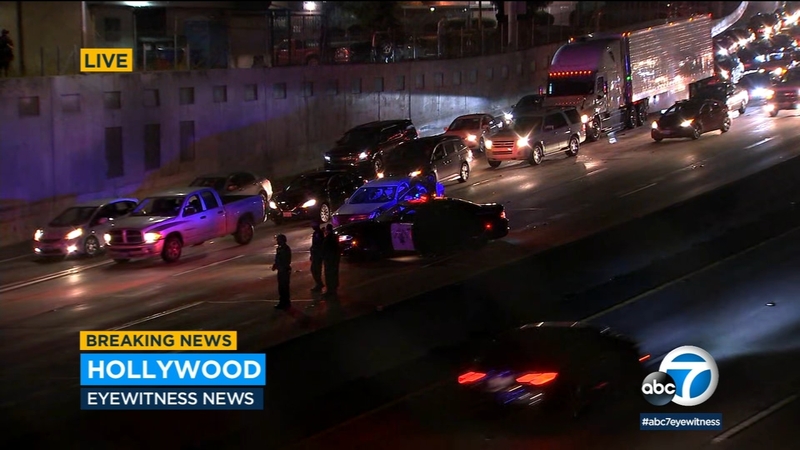 HOLLYWOOD, LOS ANGELES (KABC) -- The 101 Freeway was blocked and shut down in the Hollywood area by protesters Saturday night.

The CHP said the blocking of lanes was first reported around 9:30 p.m. Lanes of the 101 were shut down in both directions in Hollywood.

By 11 p.m. traffic was flowing along the northbound side while the southbound side had a single lane open as cars moved slowly with CHP assistance.

The protesters were associated with Armenian-American groups who have been demonstrating in Los Angeles over what they have described as aggression against their homeland by Azerbaijan.

They gathered around the CNN building in Hollywood earlier Saturday evening to call for more media coverage of the conflict between Armenia and Azerbaijan. They also shut down part of Sunset Boulevard.

The armed hostilities between the two nations center around the disputed Nagorno-Karabakh region, a conflict that dates back decades. Deadly skirmishes broke out over the summer.

"We demand a end to Azerbaijani aggression against Armenia," said one protester.

The two nations have each accused the other side of being the aggressor.

Nasimi Aghayev, the consul general of Azerbaijan in Los Angeles, released a statement in response to the local protests: "Azerbaijan is defending itself, its civilian population. Armenia already killed 19 Azerbaijani civilians. Twenty percent of Azerbaijan is under Armenia's illegal U.N.-condemned military occupation for the last 30 years. One million Azerbaijanis became refugees and are currently displaced. We want peace, but peace can only be achieved when Armenia leaves the occupied regions of Azerbaijan and allows the forcibly displaced to return to their homes."