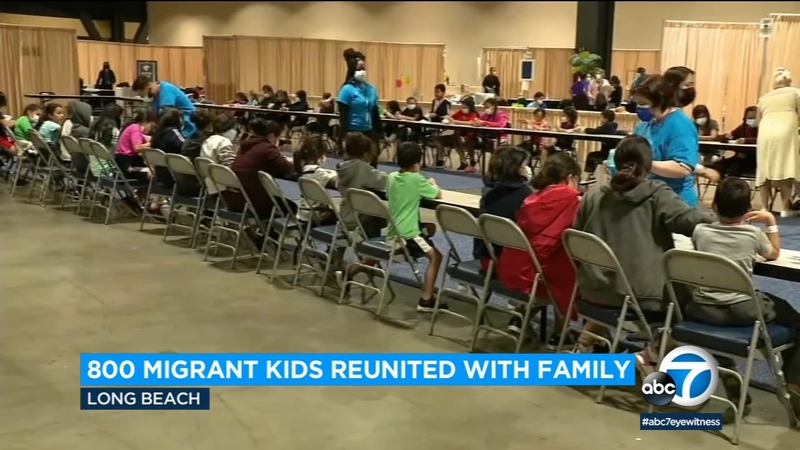 LONG BEACH, Calif. (KABC) -- After being temporarily housed at the Long Beach Convention Center, 916 migrant children have now been reunited with relatives and sponsors in the United States, the city's mayor announced Monday.

"Thank you to everyone working to unify families, care for these kids, and provide critical immigration & legal services," Mayor Robert Garcia said on Twitter.

Asked how many children remained at the emergency intake shelter, Garcia said there were 690 as of Monday afternoon. He added that the shelter "will be closing in just over a month," and noted that updates are posted on a Long Beach city website.

According to the website, on Monday the current number of children at the facility who have tested positive for COVID-19 and were in quarantine was 95.

After the U.S. Department of Health and Human Services asked the city of Long Beach to assist in temporarily housing and reconnecting unaccompanied minors, the City Council voted on April 6 to allow the city manager to negotiate a partnership agreement with the agency.

Some migrant children staying at the Long Beach Convention Center could reportedly be reunited with their families within the coming days.

The effort is being fully led and funded by the federal government, Long Beach officials said, adding that the city was focused on "welcoming the children and supporting them during the unification process."

Earlier this month, Garcia said "incredible progress" was being made and thanked a non-profit social justice firm for representing each child at the shelter.