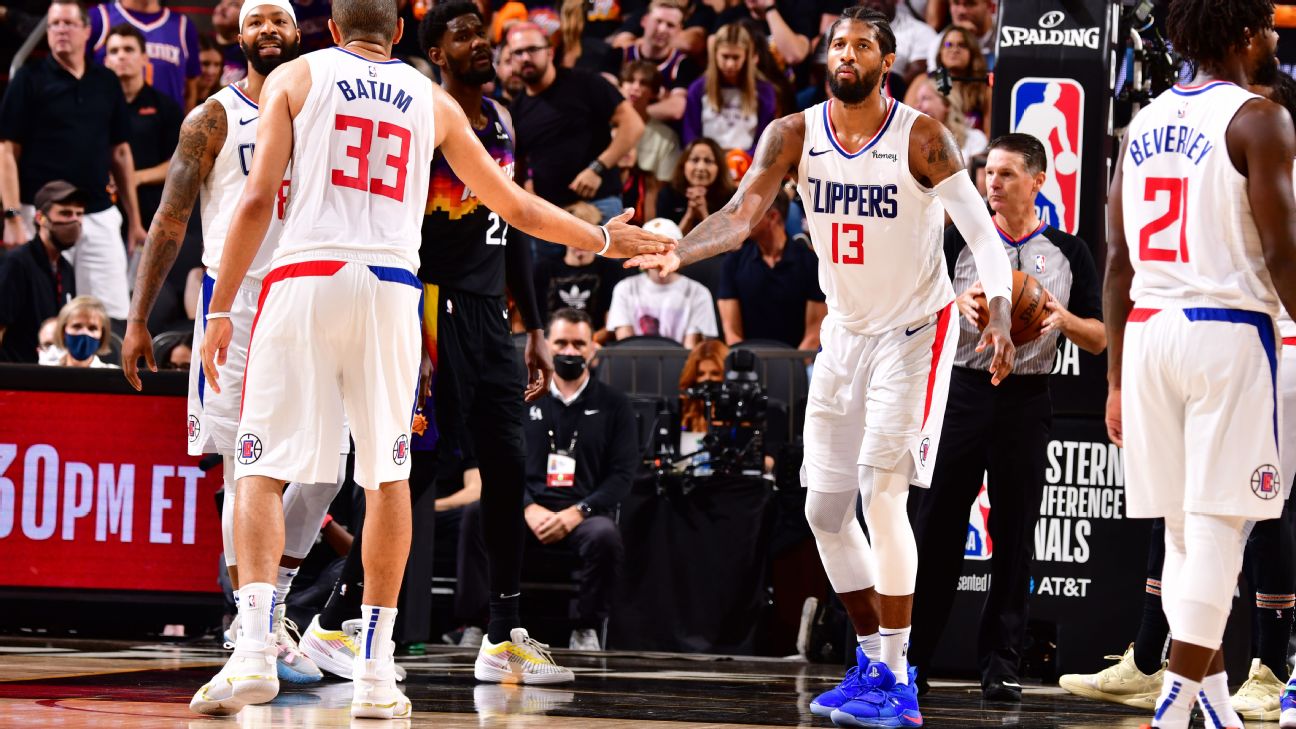 PHOENIX -- After scoring a playoff career-high 41 points on seven differentPhoenix Sunsdefenders to help theLA Clippersstave off elimination, Paul George took a well-deserved seat with 1:14 remaining in Monday night's Game 5 when he was greeted by a line of Clippers coaches all congratulating him one by one.

Finally, Tyronn Lue was the last to slap hands with the All-Star before mouthing a few words that the Clippers head coach says he can't share.


"A lot of MFs," George said of what Lue told him. "And bleep this and bleep that."

After missing two crucial late free throws in LA's Game 2 loss, George returned and silenced Phoenix Suns Arena with his finest playoff performance. George made 15 of 20 shots and scored 41 points to go with 13 rebounds, six assists and three steals to send the Clippers back to Los Angeles for Game 6 with a 116-102 victory Monday night.

TheClippers, the only team to overcome a 2-0 deficit twice in the same postseason, now trail in the Western Conference finals 3-2. They can force a Game 7 with a win on Wednesday at Staples Center.

They likely would not still be playing if it wasn't for George. Lue said he doesn't understand why his star guard's struggles are "magnified so much when he doesn't play well" -- like after Game 2, when George missed two free throws with the Clippers up one point late before the Suns won on a last-second Deandre Ayton alley-oop.

George was asked after Monday's game if he feels he is picked on more than other NBA stars when things go bad.

"What I can do is do everything else," he added. "They can judge me on what they want to. That part don't matter to me. I'm going to go out there and hoop and give it everything I got."

Already without an injured Kawhi Leonard (sprained right knee), the Clippers learned that starting center Ivica Zubac (sprained right MCL) would be out, as well, on Monday. Lue said the Clippers were feeling confident at their morning shootaround, but players were saddened by the news about Zubac, who had been playing his best basketball, logging a double-double in three straight games before injuring his knee in the second half of Game 4.

Marcus Morris Sr., starting at center, had his best game of the series, hitting his first six shots and scoring 13 of his 22 points in the first quarter. The Clippers jumped out to a 20-5 lead in the opening minutes. That allowed George to feel his way into the game, according to Lue.

In the third quarter, Chris Paul hit a 16-footer that gave the Suns a 62-61 lead with 8:27 remaining in the frame. But George scored 18 of his 20 third-quarter points after that. He made 7 of 8 shots and buried three 3s in the quarter to send the Clippers into the fourth up by 13.


"I don't know where this trolling bulls--- has come from where the internet controls the narratives about these players," said DeMarcus Cousins, who scored 15 points in 11 minutes off the bench. "It's becoming foolish, man. Like I said earlier in the year, [George is] one of the most special players to ever lace his shoes up.

In the fourth quarter, the Suns made another run, cutting the deficit to 98-94 with 6:58 remaining. But as he has done this entire postseason, Reggie Jackson (23 points) hit timely and clutch shots for the Clippers. Jackson drilled two 3-pointers and threw down a dunk off a fast break started by a George steal. George scored six more points as the Clippers used a 14-2 run to steal Game 5 on the road.

Afterward, the Clippers were buzzing about George's performance, as he shot 10-of-14 on contested shots. He did a lot of his damage on pull-ups, going 7-for-10 on those shots, according to ESPN Stats & Information research. And he scored on seven different primary Suns defenders. 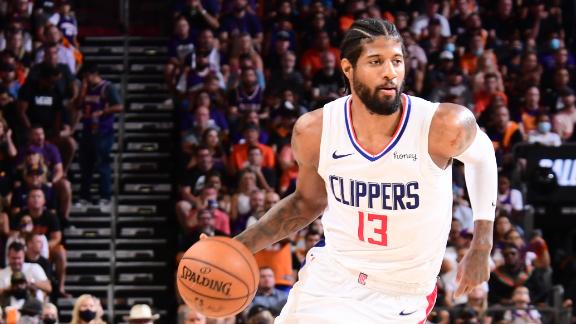