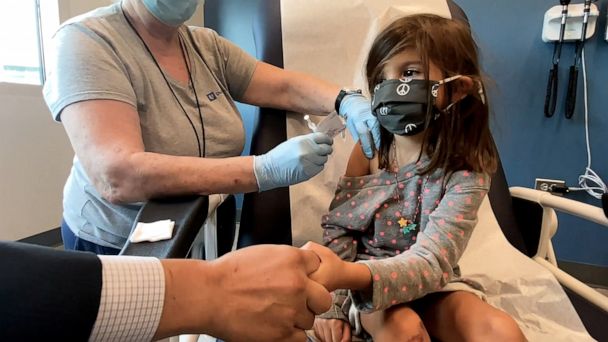 In a private phone call Tuesday with the nation's governors, the White House said states should prepare to begin vaccinating elementary-school-aged kids against COVID-19 in early November and that it would work with local health officials in the coming days to identify which sites will receive the first doses.

In audio obtained by ABC News, White House officials told the governors it had enough pediatric doses on hand for the 28 million children ages 5 through 11 expected to become eligible once federal regulators give the green light.

Once that happens, the pediatric Pfizer vaccine will be distributed in 100-dose packs. The doses, which are about a third of what is given to adults, will be sent to thousands of sites, including pediatricians, family doctors, hospitals, health clinics and pharmacies enrolled in a federal program that guarantees the shots are provided for free.

Some states are planning to provide the vaccine through schools as well.

"We've secured plenty of supply, and we'll be putting in place an allocation, ordering and distribution system similar to what we've used for the other vaccines," said President Joe Biden's White House COVID coordinator, Jeff Zients, on the phone call to governors.

"It's important that all of us recognize that parents have been waiting for a pediatric vaccine for a long time so they will understandably be very eager to get their kids vaccinated or kids vaccinated right away," he said.

Pfizer's study on elementary-school-aged kids included 4,500 volunteers from the U.S., Finland, Poland and Spain. Precise details on the effectiveness of the vaccines in clinical trials involving kids has not been publicly released, although Pfizer says the study showed the smaller dosage was safe and effective.

Separate vaccine trials are under way for toddlers and preschoolers, with results expected by the end of the year. A Pfizer vaccine for kids under 5 is expected to become available in early 2022.

Both the U.S. Food and Drug Administration and the Centers for Disease Control and Prevention must agree the pediatric COVID vaccines are safe and effective before any shots are given to kids.

Key meetings with independent advisers to those agencies are scheduled for later this month and the first week of November.

In anticipation of the FDA and CDC authorizing the vaccine for kids, the federal government purchased 65 million pediatric two-shot doses from Pfizer. According to the Department of Health and Human Services, 70% of providers who administer vaccines to kids are enrolled to offer COVID shots.

Whether parents will embrace the vaccines for their kids is still a question and could depend upon details released in coming weeks on the clinical trial. In a September poll, the Kaiser Family Foundation found that about a third of parents with kids ages 5-11 were willing to vaccinate their kids right away, while another third wanted to "wait and see." The figures represented a slight uptick in vaccine acceptance among parents of elementary-school-aged kids since July.

Overall, children are still considered significantly less likely than adults to experience bad outcomes from COVID-19. According to an estimate by the American Academy of Pediatrics and the Children's Hospital Association, less than 2% of all child COVID-19 cases resulted in hospitalization.

Still, health officials warned that the sudden spike in COVID cases this summer and fall resulted in an alarming number of hospitalizations among kids. Since late August, the U.S. reported more than 1.1 million pediatric cases.