Difference Between $12, $15 Minimum Wage Bigger Than It Seems 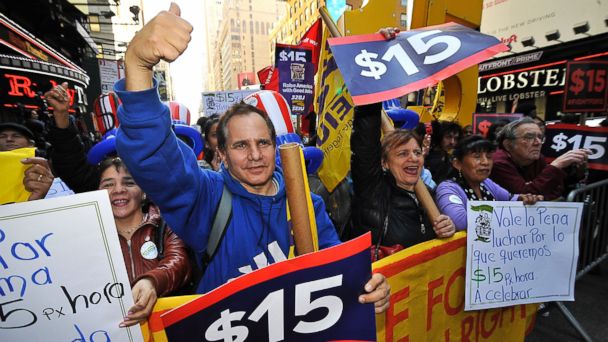 The Democratic Party presidential hopefuls sparred Thursday night over what might seem to be minor differences when it comes to a $12 or $15 minimum wage. But the economic effects on workers and businesses can vary widely with the difference of just $3.

Bernie Sanders accused Hillary Clinton of not fully supporting a $15 minimum wage because she, at one point, supported a $12 federal minimum wage as a floor. The movement toward a $15 minimum wage made giant strides in the past month when California and New York passed laws to raise their state minimum wages to $15 over time.

Many economists have said they favor raising the federal minimum wage, now $7.25, to $10.10, hoping to help working families while avoiding a spike in unemployment. The jump to $12, and especially $15, could have far-reaching effects by, for example, pricing people out of a job, some economists say.

Labor economist Gary Burtless, a fellow with the Brookings Institution, said there are very few economists who think the effects of raising the minimum wage to $15 an hour would produce the same effects on the job market as raising it to just $12. That assumes the minimum wage increases to those two levels would occur on the same schedule and would be imposed on the national level, not just in areas like New York City, Seattle and San Francisco where prevailing wages are already relatively high.

The obvious point is that $15 an hour is 25 percent higher than $12 an hour, and that difference greatly increases the number of workers who would be directly affected by a minimum-wage hike, Burtless said.

Depending on the schedule for hiking the minimum wage to $15 an hour, the jump in the minimum wage could negatively affect half of all the workers in some low-wage jurisdictions, according to an analysis by the Washington Post of wage statistics published by the U.S. Bureau of Labor Statistics.

"It seems to me very probable that the employment losses would be quite a bit larger under a $15 federal minimum than under a $12 minimum," Burtless said. "And I am speaking as a labor economist who strongly supports the president's call for an increase in the federal minimum wage to $10.10 an hour. I can even be persuaded that a hike in the minimum wage to $12, if phased in over a long enough period, could be a good idea, depending on the condition of the economy and the rate of increase in U.S. median wages."

At either wage hike, Brian Hamilton, chairman and founder of Sageworks, a financial information company, said he believes consumers will end up paying more for goods and services because businesses must maintain profit margins to survive. The average net profit margin of businesses in the country is around 4 percent, "which is thin," Hamilton said.

But the second difference is a downside, he said.

"If we want low-skilled people to still get or keep jobs, $12 is a stretch for many, while $15 might be impossible. Think of someone earning $10 right now," Holzer said. "They probably get hired or kept at $12 but not $15. And those earning $8 right now might be priced out the market at both wages."