Former Speaker Mocks Cruz as 'Lucifer in the Flesh' 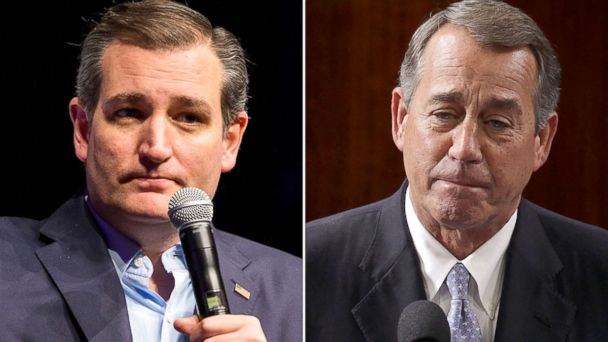 In a talk at Stanford University Wednesday, the plainspoken Ohio Republican called the Texas senator "Lucifer in the flesh," adding that he found Cruz difficult to work with in Congress.

"I have Democrat friends and Republican friends," Boehner said, according to the Stanford Daily. "I get along with almost everyone, but I have never worked with a more miserable son of a bitch in my life."

Cruz sparred with Boehner throughout his speakership over funding the government, most notably in 2013, when the government shut down for more than two weeks. Cruz's allies in the House helped force Boehner out of Congress last year.

Boehner, an avid golfer, said he and 2016 front-runner Trump are "texting buddies," and that they've played golf together over the years. He stopped short of endorsing his policies, but said he would vote for Trump in the general election if the New York businessman becomes the GOP nominee.

Cruz took to Twitter this morning, writing, "Tell me again who will stand up to Washington? Trump, who's Boehner's "texting and golfing buddy," or Carly & me?"

"I've met John Boehner two or three times in my life. If I have said 50 words in my life to John Boehner. I would be surprised and every one of them has consisted of pleasantries," Cruz said.

Cruz's campaign spokesperson, Catherine Frazier, said the two did not directly work together when Boehner employed Cruz to represent him in a lawsuit in the late 1990's against Rep. Jim McDermott, D-Washington, when the Washington Democrat leaked an illegally recorded phone call to the New York Times.

Of Ohio Gov. John Kasich, who served with Boehner in the House of Representatives in the 1990s, Boehner said he "requires more effort" than his other friends ... but he's still my friend, and I love him."

Boehner voted for Kasich in the Ohio primary, and endorsed his bid for president, though he has also thrown House Speaker Paul Ryan's name into the 2016 mix. (Ryan, who is not running for president, has said he's told Boehner to "knock it off.")