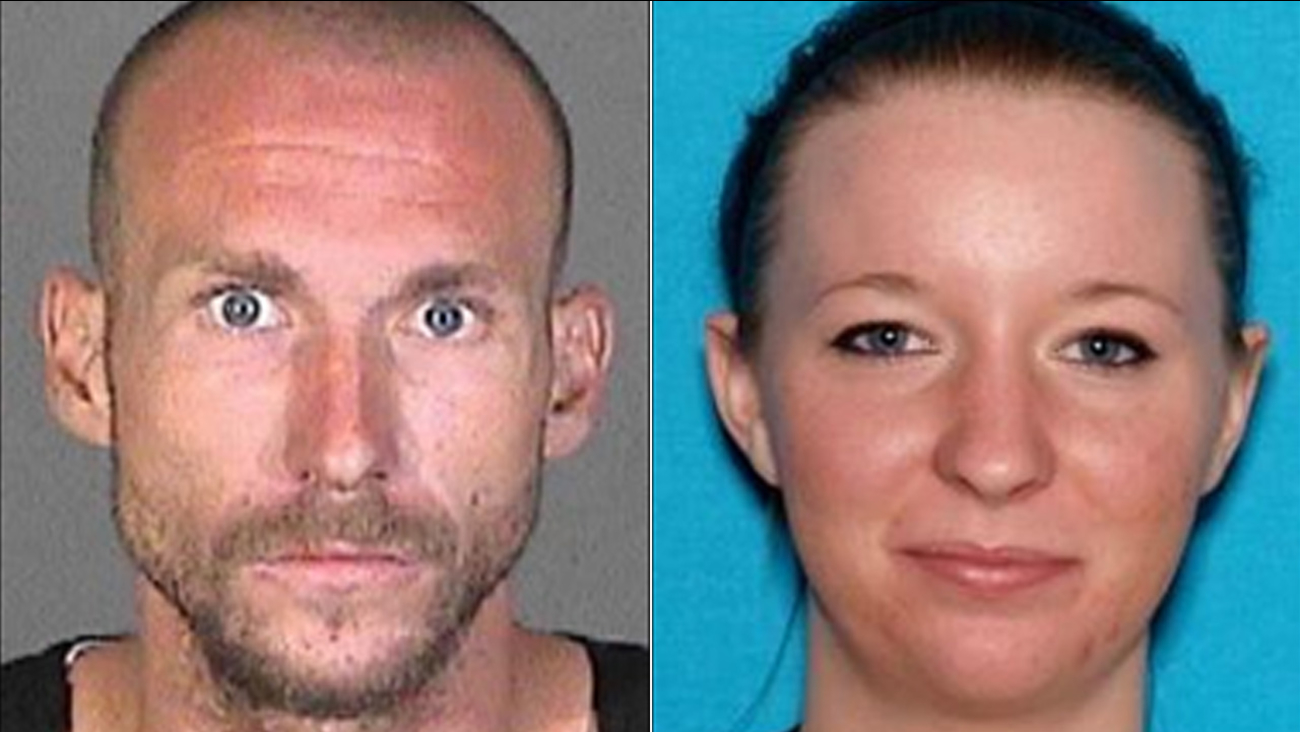 Joshua Robertson (left) and Brittany Humphrey (right) were wanted in connection with the kidnapping of Kimberly Harvill's children, officials stated.

PUEBLO, Colo. (KABC) -- A couple wanted for the kidnapping of three children and for questioning in the death of a woman found in Gorman have been arrested in Colorado, officials said.

The couple, Joshua Aaron Robertson, 27, and Brittany Humphrey, 22, were arrested without incident at a motel in Pueblo.

Pueblo police had been on a routine patrol check at the motel around noon Thursday when they came across Humphrey in a car. They identified her as the person wanted in Los Angeles and then found Robertson nearby and took them both into custody without incident, according to Los Angeles County Sheriff's Department Lt. Joe Mendoza.

An infant girl who was traveling with them was also found safe and taken into protective custody by Pueblo police.

Joshua Robertson (left) and Brittany Humphrey were arrested in Pueblo, Colo. on Thursday, Aug. 25, 2016 as suspects in the kidnapping of three children from Southern California.

The child, Madisyn Harper, who is about 19 months old, had previously been identified as Robertson's daughter. But Mendoza on Thursday said in fact the girl was not his biological child. Her mother is incarcerated and had asked Robertson to care for the child, Mendoza said.

The two had been sought in the kidnapping of the three children of Kimberly Harvill, who was found shot to death in Gorman earlier this month. She is Humphrey's sister. They were also wanted for questioning in connection with Harvill's death.

On Thursday, Mendoza reiterated that "right now they are just persons of interest in that murder."

The two had also been identified as suspects in the kidnapping of Harvill's three children several days after her body was found. On Wednesday, the three children were left safely with a Good Samaritan at a motel outside of Albequerque, NM but the two suspects were still being sought at that time.

Alerts to law enforcement were put out across the country for the couple, particularly to agencies along Interstate 40.

The children were found at a motel in Grants, NM, just west of Albuquerque off I-40. Pueblo is about a 7-hour drive north of Grants on Interstate 25, officials noted.

Los Angeles officials are beginning the extradition process to return the two kidnapping suspects to Southern California. Depending on whether they fight extradition, the process could take several days or longer than a month, Mendoza said.
Copyright © 2021 KABC-TV. All Rights Reserved.
More Videos
From CNN Newsource affiliates
TOP STORIES