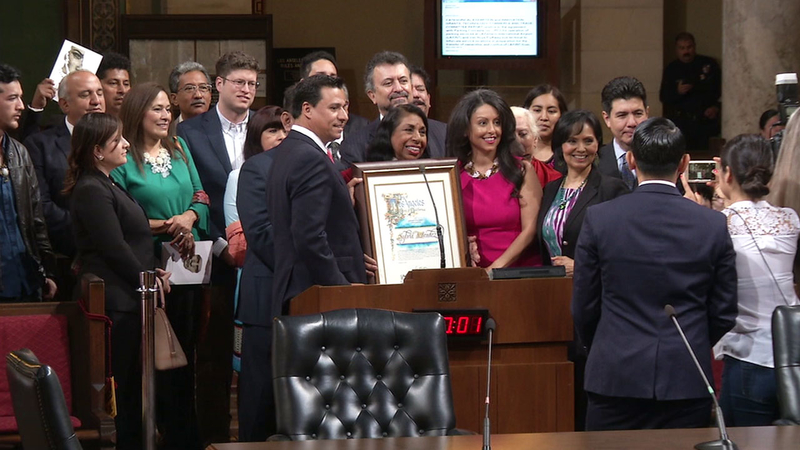 LOS ANGELES (KABC) -- Sylvia Mendez was 9 years old when her parents took on the Orange County Board of Education.

Felicitas and Gonzalo Mendez fought back in the 1940s after a school turned their daughter away because she was Latina. Back then, she did not really understand what the fight was about.

"All I was thinking was that my parents wanted me to go to that beautiful white school," she said.

But after her parents and other families won the lawsuit, she faced the tough reality. She recalled a moment when a young boy told her she was Mexican and didn't belong at the school, which made her cry.

Mendez recalls her mother's encouraging words: "Sylvia, we were fighting because you are just as good as this boy. Under God, we all deserve the same equalities, the same education."

Mendez went on to become a nurse and honored her parents' legacy by advocating for education. In 2011, she received the Medal of Freedom from President Barack Obama.

On Wednesday, she was recognized as the Los Angeles City Council's 2016 Latino Heritage Month Honoree.

While Mendez has played a key role and witnessed much of the progress over the last 70 years, she said there is still a lot of work to do - and at 80, she's willing to continue that work.

"I'm going to five states next month to speak about Mendez v. Westminster, and talk about how California was the first state to be integrated. People aren't aware," she said.

She's also set an example for her own family. Mendez adopted two girls as a single woman. Her oldest daughter Renee joined her at the council ceremony, saying she is proud of her mother and admires her resilience.

"It's such an honor because I have two little girls," Renee Mendez said. "I get to use her as the example - besides us - because she is the one that is our pillar."
Related topics:
societylos angeleslos angeles countyorange countylos angeles city councileducationlatinalatino heritage monthcivil rights
Copyright © 2021 KABC-TV. All Rights Reserved.
More Videos
From CNN Newsource affiliates
TOP STORIES