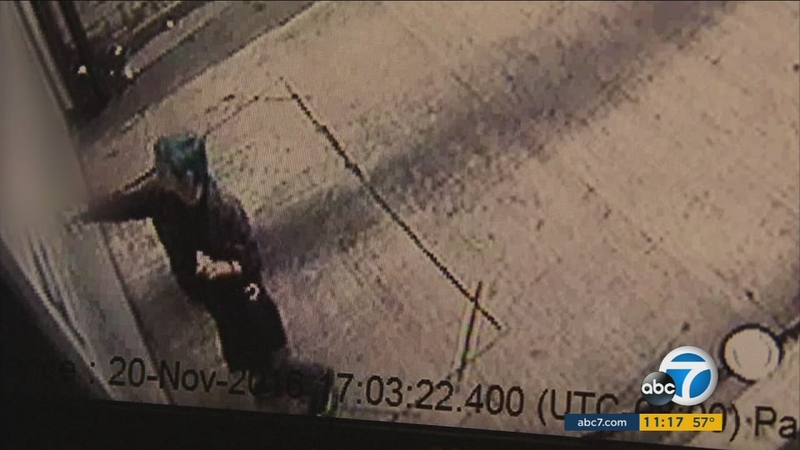 DOWNTOWN LOS ANGELES (KABC) -- Authorities released surveillance video of a vandal armed with a spray can who targeted three historic buildings in downtown Los Angeles, and they're hoping it'll lead to the tagger's arrest.

A blue-haired woman is seen on video abruptly turning from the sidewalk, stumbling through some plants and shaking a can of blue spray paint - all before scrawling along the length of the wall with a cigarette burning in her other hand.

The tagger targeted several L.A. landmarks, starting with the Hall of Justice.

"It's kind of a sentimental and historic building, as well as some of the other buildings in the area," he said.

Authorities then tracked her south on Spring Street, where she appeared to try to walk up an entrance to a parking garage, but likely got spooked by a security guard and continued on.

At one point, cameras caught her at a bus bay at the Clara Shortridge Foltz Criminal Justice Center. You can see her shaking the can again as she walks down the ramp, appearing to write anti-Donald Trump messages.

Authorities believe she's also responsible for similar destruction at the Hall of Records and at 301 West Temple Street.

Gabriela Duncan of Koreatown said she understands the vandal's frustration, but said nothing positive will come out of destruction.