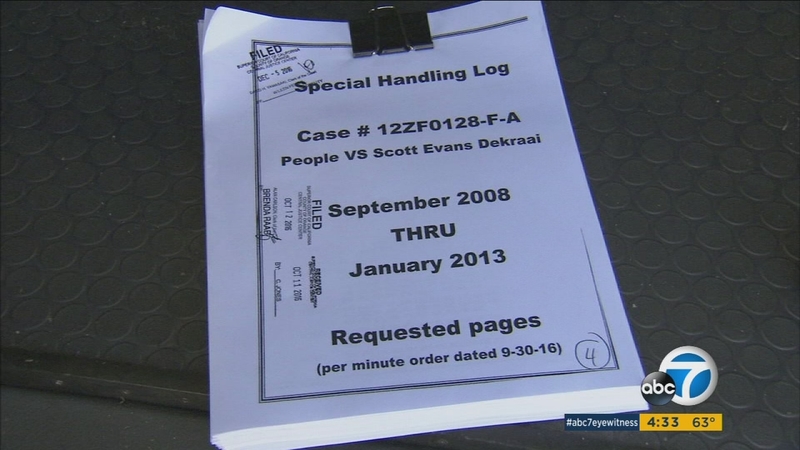 A portion of the jailhouse records, called the "special handling log," will be made public.

A judge ordered the release of nearly 250 redacted pages out of more than 1,100 pages. It's about five years worth of notes that were compiled by special handling jailers who dealt with inmates, including informants.

The jail log emerged during the case of Seal Beach mass murderer Scott Dekraai. His defense attorney alleged a conspiracy involving prosecutors and deputies after learning a jailhouse informant gathered evidence against Dekraai after he already had an attorney, which is a violation of the law.

The notes revealed a jail housing section, L20, was fitted with a microphone. It's not clear if defense attorneys received recorded information.

The logs contradict testimony by deputies during the Dekraai case.

In 2014, Orange County Sheriff's Deputy William Grover testified, "I rarely work with informants. And to be honest with you, I try and avoid jailhouse informants."

But the logs show Grover made many entries, including one in October 2011 that read, "Received a CI (confidential informant) call on special handling hotline in regards to Seal Beach murders."

Another deputy, Seth Tunstall, who the judge said either lied or withheld evidence from the court, testified during Dekraai's case that he did not cultivate informants. However, a 2009 log entry showed Tunstall was so skilled, deputies asked if he "could teach us what it takes to cultivate a CI on the street."

The logs have become the latest piece of evidence in what's become known as the "jailhouse snitch scandal." The notes surfaced last spring, about three years after the judge ordered all informant-related documents be turned over to the court.

Orange County Sheriff Sandra Hutchens tried to stop the release of the unauthorized notes, arguing they contained sensitive information that could endanger the safety of jail employees and inmates.

The judge ruled that the public's right to information outweighed those concerns.

In a statement, Hutchens said, "The process of discovering the logs, reviewing and submitting them to the court has been a methodical and coordinated endeavor. The OCSD has taken several steps to locate additional classification and special handling notes/records and to improve recordkeeping and internal processes."
Related topics:
santa anaorange countytrialscandalmurdercourtorange county sheriff's department
Copyright © 2021 KABC-TV. All Rights Reserved.
More Videos
From CNN Newsource affiliates
TOP STORIES