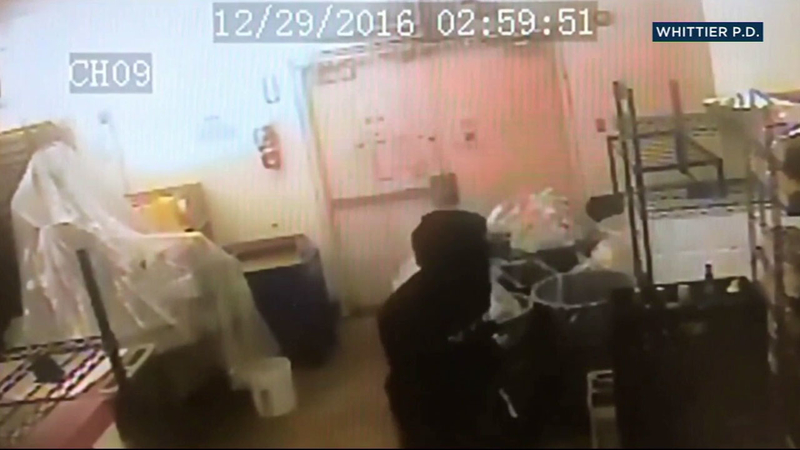 WHITTIER, Calif. (KABC) -- A series of burglaries occurred early Thursday morning at three businesses in Whittier, authorities said, prompting a search for a pair of suspects.

The first of the forced-entry incidents happened shortly after 2 a.m. at a Marie Callender's restaurant in the 12400 block of Washington Boulevard, where no cash or property was stolen, according to the Whittier Police Department.

Just after 2:30 a.m., burglars targeted a BevMo in the 15500 block of Washington Boulevard. About $6,000 worth of high-end liquor was taken, investigators said.

A MoneyGram in the 141200 block of Lambert Road was broken into about 2:52 a.m., police said. Authorities said the thieves took money, but it was not released how much was taken.

Employees at a meat market, where the MoneyGrem is located, believe the same suspects are responsible for a theft that happened last year in which thousands of dollars were taken.

Surveillance video was obtained from two of the locations, authorities said. The videos show the duo rifling through offices and ransacking the businesses.

The suspects are described as two men who were each wearing hoodies, masks and gloves. A newer, dark-colored Ford 4x4 pickup truck was being sought in the case.