KABC
By Eileen Frere
PALMDALE, Calif. (KABC) -- More than 100 friends and family members - many holding candles - prayed at a crash site in Palmdale Monday evening where a father and his teenage daughter died 24 hours earlier.

Manny Paniagua, 54, and his 17-year-old daughter Vanessa Paniagua were killed less than a mile from their home when his car slammed into a traffic pole so hard that it split the yellow 2014 Chevy Camaro in half.

"It's showing me how much they were loved, how much people thought of them," said Alfred Lupercio, Manny Paniagua's father-in-law and Vanessa's grandfather, as he looked at the crowd of mourners.

Manny Paniagua and his daughter were driving home after dinner at about 6:30 p.m. on Sunday when the crash occurred.

"It's never easy losing a family member," said Martha Castro, Manny Paniagua's sister and Vanessa's aunt. "When it comes to two people, it's even worse."

Since word of their deaths, the Paniagua home has seen an endless stream of visitors as family and friends wish to provide comfort.

"He was the head of the household, I always came to him for advice," Castro recalled while fighting back tears. "He was the one we would all come to."

Vanessa - a Palmdale High School student - was the youngest of six children and the only girl.

"My sister just (had) the biggest heart," recalled Giovanni Paniagua. "She was always there for you no matter what... (a) smart girl."

Manny Paniagua, who would have turned 55 years old on Valentine's Day, loved his sports car, which he would drive on weekends.

"That was his pride and joy," Giovanni Paniagua said. "That was his baby. Cleaned it all the time, made me clean it."

What led up to the crash remained under investigation. Witnesses said Manny Paniagua may have been street racing with another driver. Authorities have not confirmed the account from witnesses.

If there was street racing involved, the Paniagua family said they hoped someone would come forward.

"I'm not blaming that person. Everyone makes their own decision and their own choices. If it was a race, he didn't have to," Castro said.

Family members said they take some comfort in knowing the father and daughter were together.

"Just live life, enjoy it, tomorrow is not a promise," said Giovanni Paniagua. 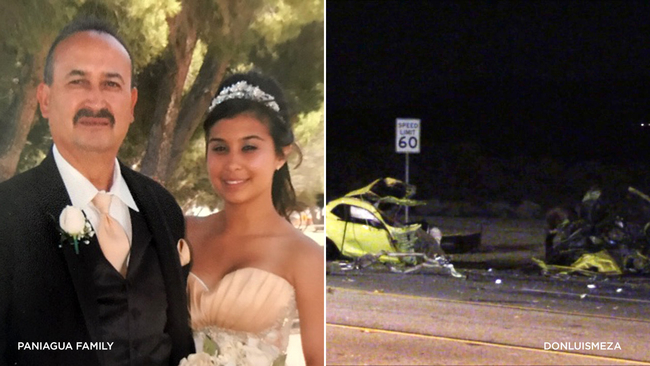