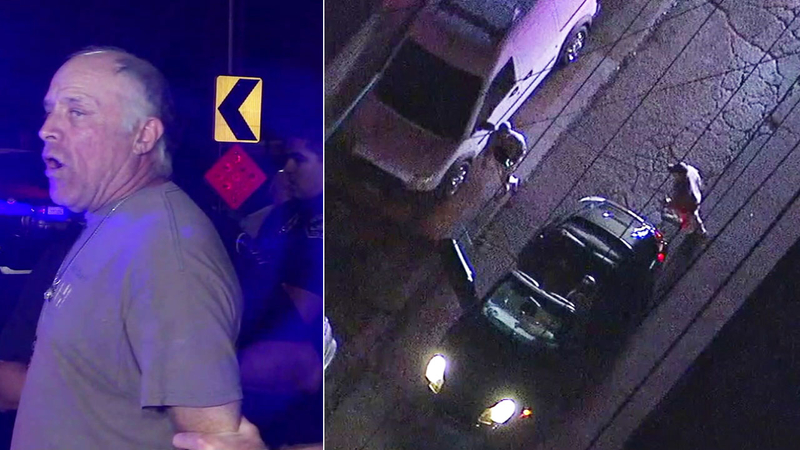 2 suspects in Porsche arrested after chase in LA, Orange counties

LOS ANGELES (KABC) -- Authorities chased a black Porsche convertible through Los Angeles and Orange counties Friday night in a pursuit that ended with two suspects in custody after they bailed on foot in a residential neighborhood in Burbank.

Burbank police said they tried to pull the vehicle over at Riverside and Bob Hope Drive after the driver was seen going the wrong way. The car failed to yield, leading to a pursuit that lasted for more than an hour.

During the chase, the black Porsche took authorities through multiple freeways, including the 101 and 10 freeways.

The vehicle crossed into Orange County as it transitioned to the eastbound 91 Freeway.

The Porsche shifted speeds on the freeways, and at one point, went at speeds that hovered 100 mph.

A male driver and female passenger, who appeared to be in distress during the chase, were inside the car.

The chase ended when the vehicle made its way back to Burbank and exited the freeway, entering a residential area.

The two suspects were seen exiting the Porsche as it rolled away. The suspects entered an alley in the residential neighborhood and were apprehended after a brief foot pursuit.

The suspect was heard ranting about the FBI, religion and more as officers placed handcuffs on the man.

Residents in the neighborhood where the chase ended identified the driver as neighbor Bill Robinson. Details regarding the female passenger were not immediately available.

Neighbors said they were not surprised to see Robinson's arrest. They said he's approached them and their children in the past and threatened to blow up buildings.

"He's peculiar," laughed neighbor Scott Corley. "He's quoting bible scriptures and then yelling, 'This is all going to come down one day.' He's approached my son before on occasions and talked about recipes to bombs, and my son goes, 'I don't know what you're talking about,' and he said, 'Well, you wouldn't, would you?' And he takes off."