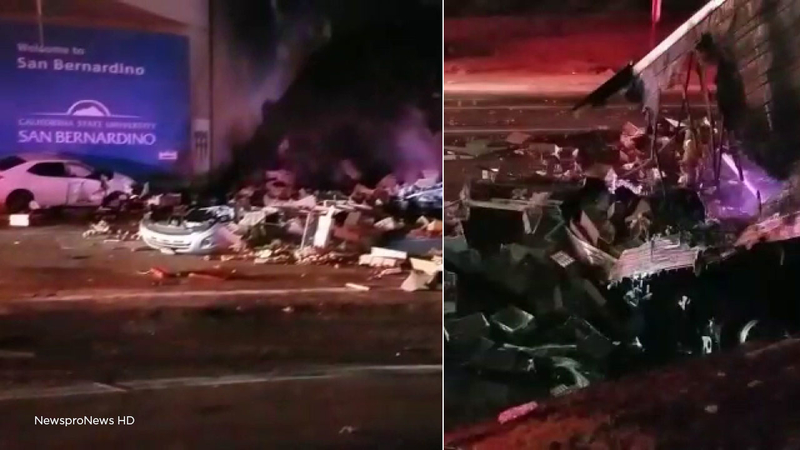 SAN BERNARDINO, Calif. (KABC) -- A hit-and-run driver caused a big rig to crash, separate and burst into flames on the 215 Freeway in San Bernardino, authorities say.

An out-of-control big rig split in two and exploded into flames as it careened off the southbound 215 Freeway near University Parkway shortly before 11 p.m. Thursday.

According to investigators, the crash started with a hit-and-run driver, who was later caught.

"The hit-and-run driver fled the scene, was later located by CHP officers and has been arrested on suspicion of driving under the influence of alcohol and felony hit-and-run, 'cause there's injuries involved in this crash," said California Highway Patrol Sgt. Robert Holtz.

The truck driver and several other drivers were rushed to local hospitals with serious injuries.

"We looked up, we saw the big rig. The trailer portion popped open the rail of the bridge and then kind of slid all the way from the north side to the south side...," described witness Steven Gallo.

The trailer and cab of the big rig, along with a cargo of nectarines, were strewn across the roadway. Some of the wreckage landed on cars traveling on University Parkway.