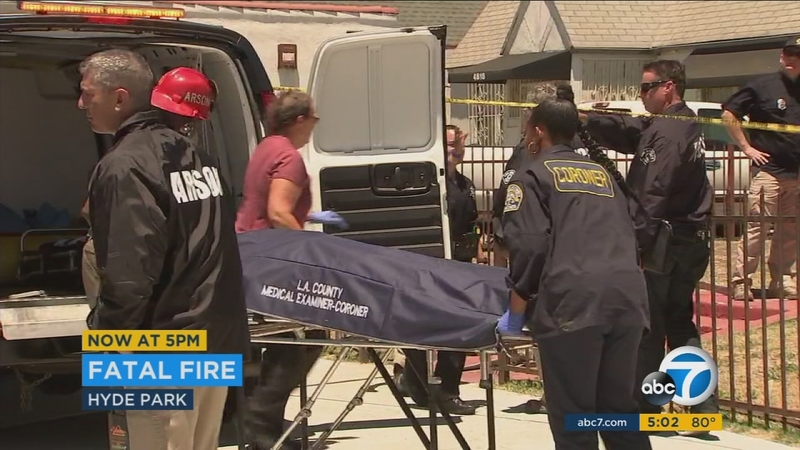 HYDE PARK, LOS ANGELES (KABC) -- A woman was taken into custody after a teenage boy was found dead inside a burned down converted garage in Hyde Park on Tuesday.

The fire was reported around 8:45 a.m. in the 4800 block of S. Crenshaw Boulevard. Around 30 firefighters responded to the scene. After the blaze was knocked down in just 13 minutes, they discovered a 17-year-old boy dead inside.

A 22-year-old man, believed to be the 17-year-old's brother, was taken to an area hospital with injuries described as not life-threatening.

The teen, identified only as Elijah by family and friends, was living in the converted garage that was being used as a sober living home.

Roommate Devin Simmons was inside the home when the fire erupted, and he blamed a woman who also lived there.

"An evil person set fire to the house for no apparent reason," he said.

The unidentified woman was taken into custody for questioning. Police said one thing is for sure: The fire was intentionally set.

The same woman, detectives said, had trashed several rooms in the main house shortly before the flames broke out. They were trying to determine a motive for setting the fire.
In the meantime, Chuck Young was mourning the loss of his grandson, who was set to start college the next day at Cal State Los Angeles.

"I was just talking to him yesterday and I was telling him I was going to teach him how to drive," Young cried. "I won't be able to teach him nothing."