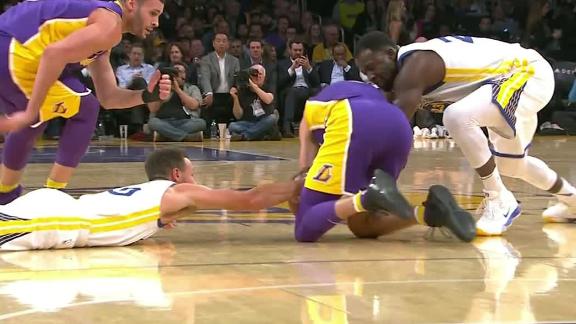 LOS ANGELES -- Lonzo Ball and the Lakers literally took their lumps from their first encounter against the Golden State Warriors this season.

Ball suffered a bloody gash above his left eye that required three stitches following the Warriors' 127-123 overtime win over the Lakers on Wednesday night at Staples Center. And fellow rookie Kyle Kuzma didn't even get to play after he was a late scratch because of back spasms that flared up after he went through his pregame routine warm-up. The Lakers decided to keep the forward out to receive treatment.

Ball's injury occurred while diving for a loose ball with Stephen Curry and Draymond Green,before also banging his head on the floor. He had the cut patched up during a timeout with 7:21 left in the third quarter before returning.

"It was a loose ball, got elbowed in the head," said Ball, who played 43 minutes. "Put some stitches and I will be all right."

In his first game against Curry and the Warriors, Ball had one of his best games of the season with 15 points and 10 assists while shooting 5-for-12 and 3-for-7 from 3-point range. Ball buried consecutive treys and scored eight straight points before suffering the gash.

"He has been shooting the lights out in practice the last week or so," Lakers coach Luke Walton said of Ball, who came into the game shooting 30.9 percent from the field and just 24.5 percent from 3. "I told him before the game, I said, 'Zo, you are going to be one of the best point guards in this league. You are. So embrace this challenge.' "

Curry missed eight of his first 12 shots and was just 1-for-5 through the first three quarters before finishing strong. He made all three of his shots, including two 3-pointers, to score 13 of Golden State's 18 points in overtime and finish with 28 points.

"[Curry is a] great player," Ball said. "He is one of the best in the world, he proved that in overtime. It was a lot of fun playing against him and you have to be locked in the whole game."

Brandon Ingram scored a career-high 32 points but missed a potential winning shot while driving to the basket at the end of regulation.

Ball's father, LaVar, reiterated his opinion that he believes his son is better than the two-time MVP Curry.