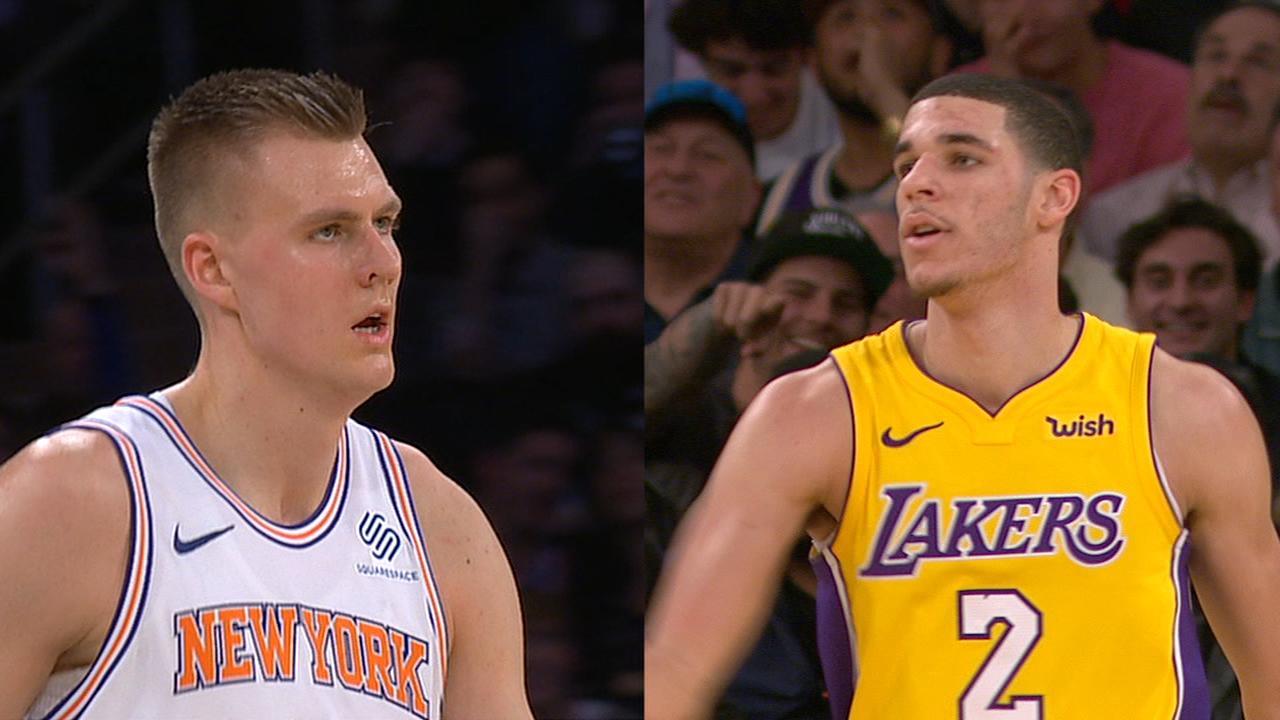 NEW YORK -- On one end of Madison Square Garden's celebrity row, Magic Johnson and Odell Beckham Jr. sat next to each other, chatting and laughing it up. On the other end, where the famous sit in The World's Most Famous Arena, LaVar Ball, his wife Tina and sons LiAngelo and LaMelo were seated a few seats away from Spike Lee.

There was enough personality on celebrity row to light up Broadway for Lonzo Ball's New York debut. And Ball, the Lakers and Knicks gave everyone in the building their money's worth by going to overtime before Kristaps Porzingis lifted the Knicks to a 113-109 victory Tuesday night.

Ball wasn't nearly as prolific, though he flirted with a triple-double, finishing with 17 points, eight rebounds, six assists and only one turnover. Kentavious Caldwell-Pope led six Lakers in double figures with 24 points, but Los Angeles (10-16) had its two-game winning streak snapped as leading scorer Brandon Ingram cooled off and missed his first 10 shots. He finished by shooting 2-for-12 with five points, seven rebounds and five assists.

Also playing in his first game at the Garden, Lakers rookie Kyle Kuzma scored 10 of his 19 points in the fourth quarter, including burying a clutch 3-pointer with 24 seconds remaining to send the game to overtime.

"For being a rookie, he's got a lot of confidence," Lakers coach Luke Walton said. "He is not afraid of the moment."

The Garden crowd got to see one of Ball's best moments of his rookie season, especially during one head-turning stretch in the third quarter when Ball went toe to toe with New York's Porzingis and Enes Kanter, sending a buzz through the Garden.

With the score tied 61-61, Ball threw down an instant highlight one-handed alley-oop dunk from Caldwell-Pope in transition. Porzingis responded with a 28-foot 3-pointer. Ball then drilled a 3 of his own. After a Kanter dunk, Ball drove and scored past Kanter, who came back with another basket before Ball assisted Brook Lopez for a 3. Porzingis then came back with another 3, capping the furious two-minute sequence.

Johnson, the Lakers' team president of basketball operations, stood up from his courtside seat and applauded his rookie point guard. Not bad for a 20-year-old who was visiting New York City for only the second time in his life -- the other time being for the NBA draft earlier this year.

"I think everyone knows when Magic is in the building," Ball said of Johnson, who drew a huge ovation when shown on the big screen. "Just his presence alone."

The other larger-than-life personality on celebrity row rooting on the Lakers, LaVar Ball, also was up on his feet loving everything he was seeing.

"Regardless, he is always going to be 'turnt' up," Ball said of his dad. "I like his energy. Some people don't."

Even though Ball, a Southern Californian who doesn't like the cold, said he didn't leave his hotel room apart from his team's game, the morning shootaround and to sign autographs at the Big Baller Brand pop-up shop Sunday, the Lakers' point guard was looking forward to Tuesday's matchup.

In fact, it's a big week for Ball, who faces LeBron James and the Cavs for the first time Thursday. Ball's favorite player growing up was James and he not only had posters of James, Michael Jordan and Kobe Bryant up on his bedroom wall but James' Cavaliers and Heat jerseys as well. Ball has been humbled and inspired by James, who has been complimentary of Ball and even wished the rookie happy birthday earlier this year.

"Every kid dreams about playing [at the Garden], just because of all the history and all the battles," Ball said. "It's going to be a lot of fun [this week]. The Garden, all the history there and then LeBron, best player in the world. Definitely two challenges, and I look forward to it."

The rookie, who came in shooting 24.6 percent from 3-point range, hit three of six 3-point attempts. While this wasn't anywhere close to Kobe or Jordan playing the Garden, there still was an air of curiosity from the crowd about what Ball could do. This was New York's first time seeing Ball play live, and at one point in the fourth quarter, Ball drew loud boos from the Garden crowd as he dribbled the ball up court.

Just a few days earlier, Ball and his family were feeling the love from New York City. Thousands of fans stood in frigid temperatures to visit the Big Baller Brand pop-up store.

"Everybody was calling my dad a legend," Ball said. "That was probably the funniest. Just yelling out the brand, saying LaVar's my hero. ... [Big Baller Brand] was just the idea that started in the house in Chino Hills. The fact that it's reached all the way out here and people are going crazy about, I didn't see it. But I assume my dad did."

With the Ball family watching, the Knicks and Lakers went down to the wire in regulation. Knicks fans -- who also had to like what they saw from rookie point guard Frank Ntilikina, who had 13 points, five assists and five rebounds -- stood up in unison and gave the home team a standing ovation with the Knicks up three in the final minute of the fourth. But Porzingis missed a tough shot inside and the Lakers' other highly touted rookie, Kuzma, drilled a 3-pointer to even the game at 99-99.

Porzingis, who nearly did it all on this night, missed a contested 3 over Caldwell-Pope at the buzzer as the game went to overtime.

But the Knicks jumped out to a six-point lead in the extra period and didn't look back. Porzingis converted a difficult driving basket in traffic in the final minute as Ball's New York debut finished with a loss and an ice pack over a bruised left thigh that he took a knee to.

"It was a lot of fun," Ball said. "You heard the crowd the whole game. Just the whole demeanor of the gym is crazy. My first time playing here it would have been nice if we got a win. It was very eventful. A good game." 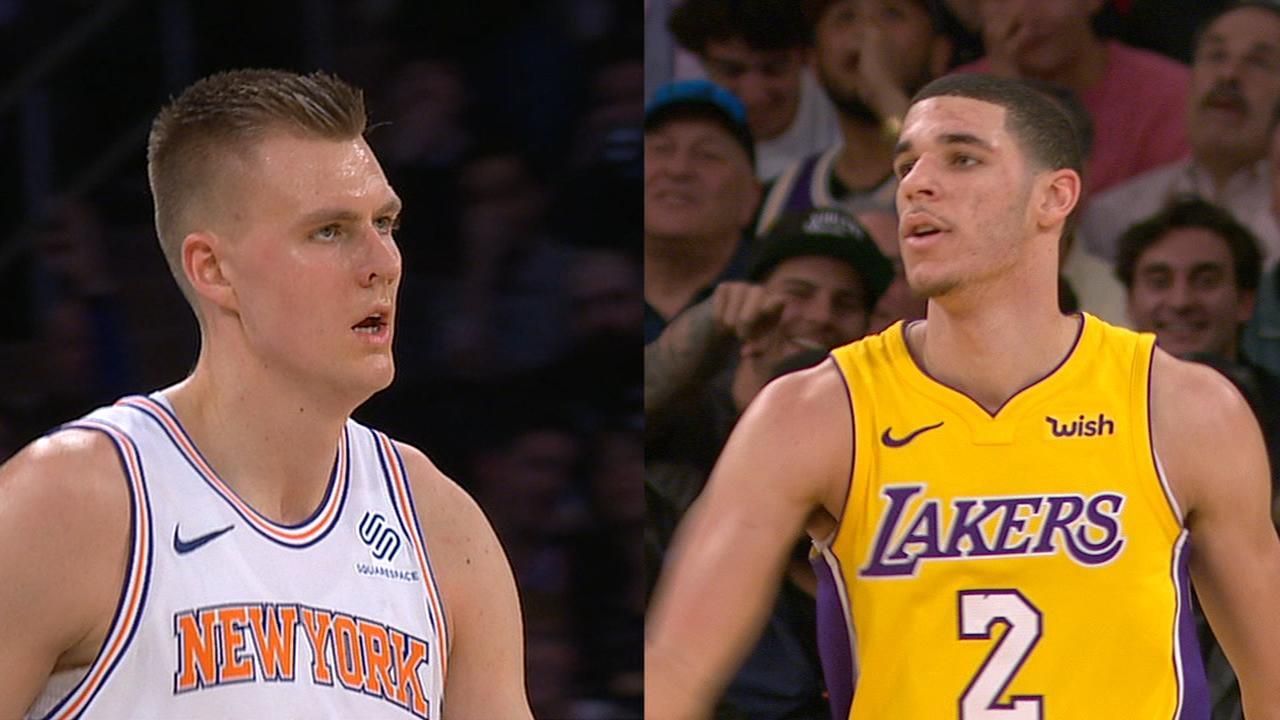 MSG lights up with Lonzo, Porzingis show down
Lonzo Ball and Kristaps Porzingis put on an electric performance in the third quarter with a wild sequence with each player leading the way for their respective teams.

Ball rocks MSG with alley-oop finish
Lonzo Ball comes up with the steal, passes ahead to Kentavious Caldwell-Pope, who lobs it up to Ball for a huge one-handed dunk that gets LaVar Ball and Magic Johnson excited.