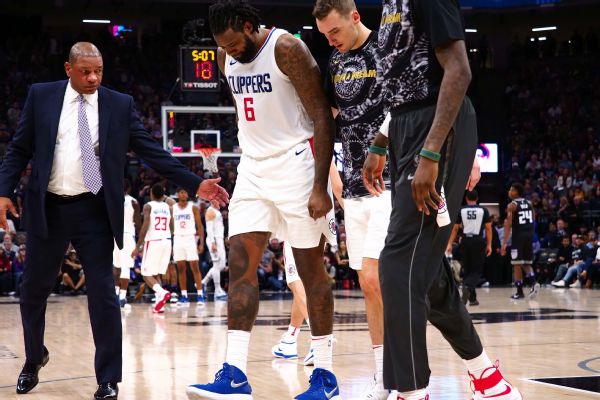 LOS ANGELES -- In a season that has been consistently marred by injuries, the last man standing for the Clippers was the latest to sit.

It marked the first game Jordan missed because of injury in his 10-year career, all with the Clippers. His next game will tie him with Randy Smith for most played in franchise history at 715.

Jordan, a first-time All-Star last season, is averaging 11.8 points per game on 66.1 percent shooting and leads the Clippers with 14.9 rebounds and 1.0 blocks per game.

Coach Doc Rivers said he didn't think Jordan will be out long, but added, "I can't guarantee it."

Jordan was injured on one of his highlight alley-oop finishes, catching a Lou Williams lob with one hand and finishing over Kings power forward Skal Labissiere. But Jordan failed to stick the landing, coming down awkwardly on the side of his left foot and staying down for the next defensive possession. Jordan exited the game with 5:07 left in the first half and was ruled out for the second half.

He has missed games because of coach's decision, illness and rest, but never because of injury before Saturday. The last time Jordan didn't play was on March 16 at Denver, the second night of a back-to-back.

Willie Reedstarted in Jordan's place against the Kings, finishing with 14 points and 13 rebounds. Reed was the 16th player to start a game this season for the Clippers, and Los Angeles used its league-leading 21st starting lineup of the season.

"Everyone can step up, it doesn't matter who it is,'' Reed said. "I just try to be ready when the opportunity presents itself."

The Clippers have had to deal with various injuries to all of their opening-night starters this season. Forward Blake Griffin and guard Milos Teodosic just returned from injuries Thursday, while forward Danilo Gallinari (glute) and guard Patrick Beverley (knee surgery, out for season) remain out. Guard Austin Rivers is also out due to an ankle issue, while two-way contract wing C.J. Williams is out with a sprained ankle suffered in a win at Golden State on Wednesday.