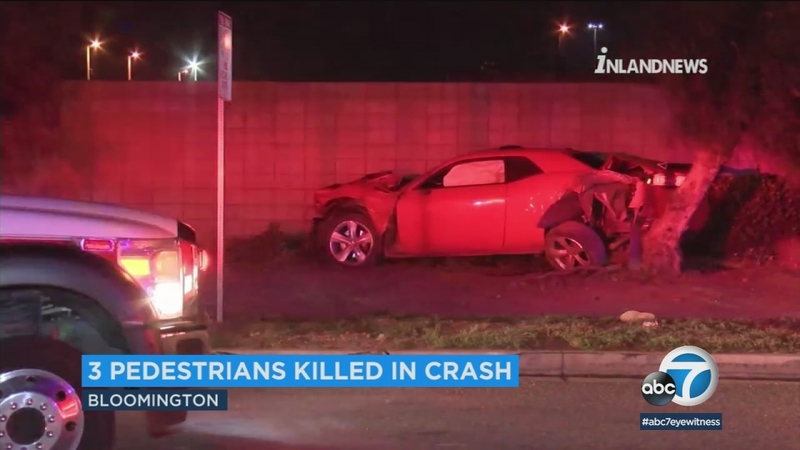 BLOOMINGTON, Calif. (KABC) -- Authorities said Monday two teenagers are among the three pedestrians struck and killed when a car veered out of control in Bloomington over the weekend.

Police said a Dodge Challenger headed eastbound on Slover Avenue around 8:35 p.m. Sunday when the driver lost control and the car left the roadway, crashing into four pedestrians on the sidewalk and then striking the wall of a building.

Three of the pedestrians died at the scene and the fourth was transported to a local hospital.

According to the California Highway Patrol, the deceased pedestrians were a 13-year-old girl, a 17-year-old boy and a 20-year-old man. All were residents of Bloomington. The fourth victim, a 49-year-old woman, was transported to Arrowhead Regional Medical Center with moderate injuries.

A GoFundMe page identified the victims as Andrea Luna, 13, and her brothers Jose, 17, and Angel, 20. Their mother, Maria, was identified as the fourth victim in the crash.

The GoFundMe page was set up to help the family pay for funeral and medical expenses. If you would like to donate, you can go to gofundme.com/donate-to-funeral-for-3-siblings.

CHP officials identified the driver of the Challenger as 19-year-old Leonardo Bravo, who they said remained at the scene after the crash. Investigators said alcohol does not appear to be a factor in the wreck but that speed does.