KABC
By ABC7.com staff
CANOGA PARK, LOS ANGELES (KABC) -- More than 11 hours after a woman climbed a tree and prompted a standoff with emergency responders at Lanark Recreation Center in Canoga Park, she came down safely Tuesday morning and was evaluated by paramedics.

The incident began shortly before 7:30 p.m. Monday at the park in the 21800 block of W. Lanark Street, where a witness reported seeing the unidentified woman smoking narcotics before she ascended the 30-foot tree, according to the Los Angeles Police Department.

Firefighters from the Los Angeles Fire Department set up a large inflatable air cushion under the tree to break the woman's fall in case she fell or jumped.

#CanogaPark; #LAFD & #LAPD continue to negotiate for over 10 hours and encourage an uncooperative adult female out of a 30’ tree in #LanarkPark for her safety. pic.twitter.com/9LrITdMEOT

Three ladders were also deployed as authorities overnight attempted to convince the woman to voluntarily come down. At one point, fire Capt. Gary Rodriguez promised she would receive a shower and a Dr Pepper if she came out of the tree voluntarily.

The ordeal ended without incident shortly before 7 a.m. when she descended one of the ladders uninjured. 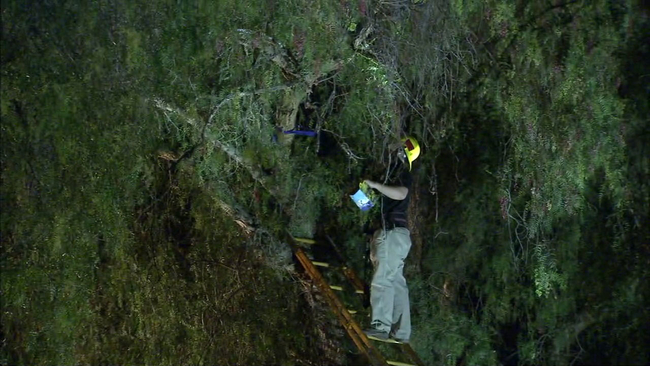