KABC
By ABC7.com staff
CAMARILLO, Calif. (KABC) -- The Hill Fire burning in the Santa Rosa Valley is diminishing as it is moving toward the burn area of the 2013 Springs Fire, fire officials announced Friday.

The blaze broke out about 2 p.m. at Hill Canyon Road, west of Santa Rosa Road. The area is mere miles from the scene of a deadly mass shooting that claimed 12 lives Wednesday night.

Ventura County fire officials said at a Friday morning press conference the blaze is about 6,000 acres with 0 percent containment. Ventura County Fire Department Chief Mark Lorenzen said the blaze appeared to be burning into the old footprint of the 2013 Springs Fire.

"The fire activity there has diminished and allowed us to focus a little bit more heavily on this fire that started yesterday at 3 p.m., the Woolsey Fire," Lorenzen said.
During the night, officials reduced the fire to approximately 4,531 acres with 15 percent containment.

No structures have been destroyed or damaged in the blaze, according to the Ventura County Fire Department. One injury was reported, but fire officials did not provide details on the person's condition. 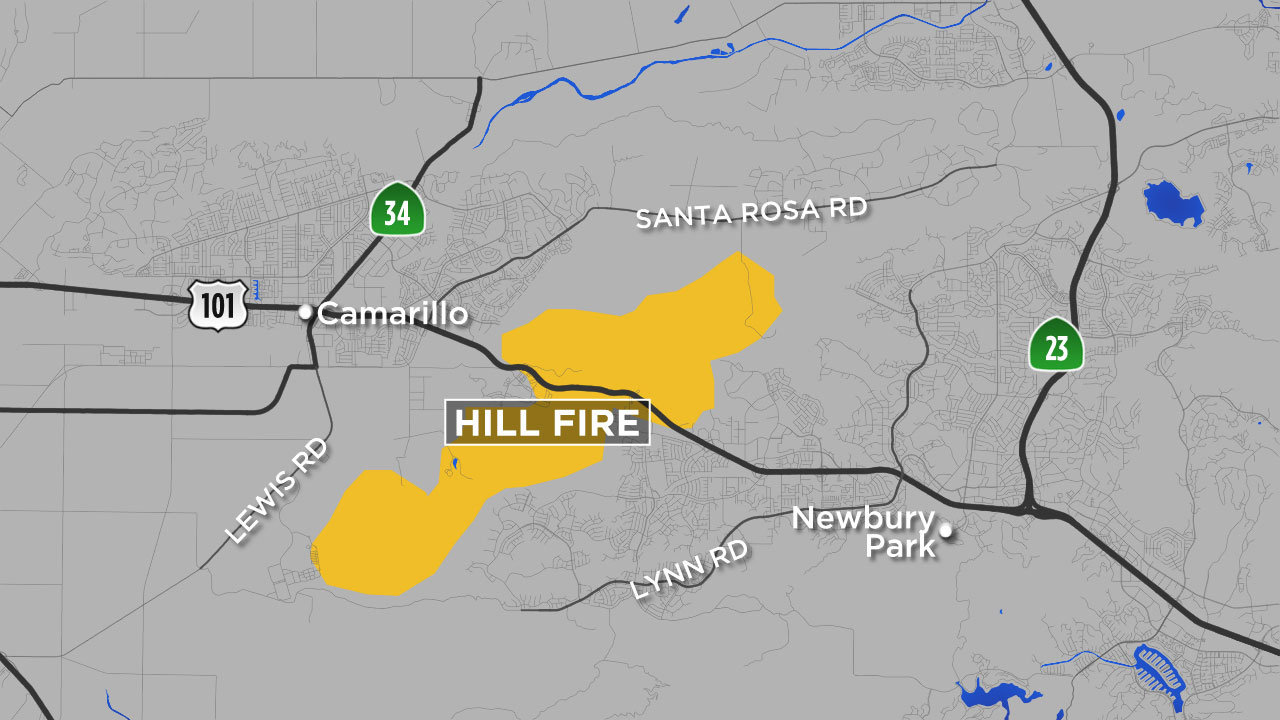 A map shows the area where the Hill Fire is burning in Ventura County on Friday, Nov. 9. 2018.

As of Saturday afternoon, SoCal Edison said about 850 customers were without power because of the blaze.

Extreme fire activity due to strong winds challenged the 450 firefighters battling the blaze overnight, but the focus was structure defense and life safety, fire officials said.

As of 7 a.m., the fire was threatening about 430 structures, including homes, commercial property, electrical infrastructure and a Navy satellite communication site on Laguna Peak.

Evacuations are in place in Point Mugu Naval Base. Orders were lifted for Camarillo Springs, California State University, Channel Islands, the Dos Vientos neighborhood and the Vallecito Mobile Home Par kin Newbury Park. For more detailed information on evacuations and road closures due to the Hill Fire, click here.

Meantime, the nearby Woosley Fire has charred 10,000 acres and destroyed several homes. It's 0 percent contained.

Acting Gov. Gavin Newsom declared a state of emergency in Los Angeles and Ventura counties due to the two fires.