50 Years of Title IX: How a Pasadena swimmer changed the game of water polo

The efforts led by Jennie Jacobsen-Huse ultimately landed her in the Water Polo Hall of Fame, and here's how she did it.
KABC
By Christiane Cordero 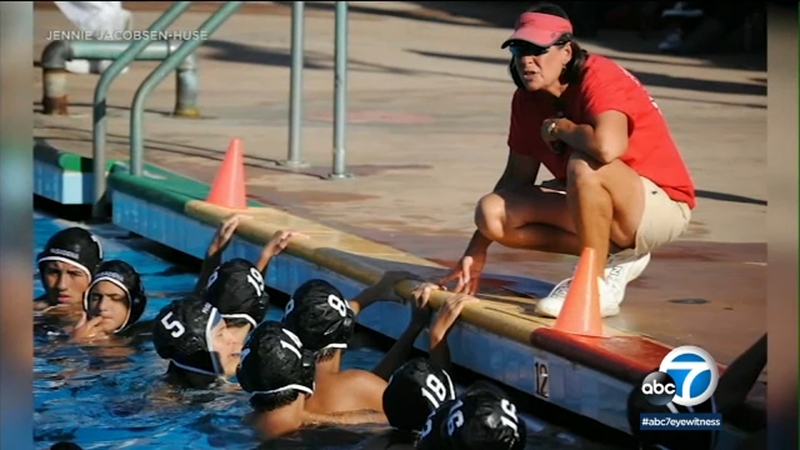 50 Years of Title IX: How a SoCal swimmer changed the game

PASADENA, Calif. (KABC) -- If you step onto the pool deck at Pasadena High School, you're walking into Jennie Jacobsen-Huse's office and down memory lane.

Jacobsen-Huse is an athletic director at PHS.

She also swam at her alma mater, and in 1970, wanted to trade the back and forth for something a little more dynamic: water polo.

The only problem was that girls water polo wasn't very common. Pasadena High certainly didn't have a team.

So at the same pool where she has since coached and led, Jacobsen-Huse and her friends started one.

"They gave us pool time, they gave us water polo balls, and some of the other high school students who were boys coached us," said Jacobsen-Huse.

They played after swim season and on their own time.

Two years later, she went to the University of California - Santa Barbara and started all over again, creating a team, coached by the boys, with no major trophy to chase.

"The first year, we each hosted a tournament: Santa Barbara, San Diego and Chico State," said Jacobsen-Huse. "It was great, we were undefeated!"

They all shared a bigger win.

It was the first year of Title IX, which protects people from discrimination based on sex in education or activities that receive federal financial assistance.

It meant girls could play.

"We were celebrating that this passed, but we had no idea how long it would take for it to actually go into effect," said Jacobsen-Huse.

By her senior year, she traveled out of state for competitions.

But she would spend decades more pushing for official representation within the California Interscholastic Federation, the NCAA, and the Olympics.

Those efforts would later get her inducted into the Water Polo Hall of Fame.

Which, of course, means she and her teammates were successful ... eventually.

Jacobsen-Huse never saw her efforts become a reality as a player, but she sure did see it through.

"It makes me almost a little emotional honestly," said Kara-Leigh Huse, who has always had her role model by her side. "Not only did she pave the way in water polo for us, and for me, but she's also my mom."

By the time she started playing competitively, girls had opportunities at every level. Today, the NCAA has 65 schools with women's water polo.

Kara-Leigh Huse earned a scholarship to the University of Southern California. Her mom got to hear her daughter's name announced from the stands.

And in 2010, 40 years after Jacobsen-Huse's first team led the way, Kara-Leigh Huse and her Trojans won the national championship, etching their own place in history.