KABC
By ABC7.com staff
LOS ANGELES (KABC) -- Nipsey Hussle was killed and two others were wounded in a shooting at the Los Angeles store owned by the rapper on Sunday, according to authorities.

The shooting was reported around 3:20 p.m. in the 3400 block of Slauson Avenue in Hyde Park. Hussle owns a store called Marathon Clothing at 3420 W. Slauson.

The Los Angeles Police Department said three people were shot in the area.

The Los Angeles County coroner's office Monday afternoon confirmed Hussle's cause of death was gunshot wounds to the head and torso and was classified as a homicide. He was pronounced dead at 3:55 p.m. Sunday.

Hussle may have sensed trouble coming Sunday. A short time before the shooting was reported, he tweeted: "Having strong enemies is a blessing."

Having strong enemies is a blessing.

Hundreds of fans and local residents came out to the store location to mourn the rapper and share stories about how he was helping the local community where he grew up.

By late Monday evening, crowd grew unruly and a stampede broke out after a disturbance.

The exact cause of the disturbance was unclear, but several people seemed to have serious injuries and were being treated by paramedics.

This doesn’t make any sense! My spirit is shaken by this! Dear God may His spirit Rest In Peace and May You grant divine comfort to all his loved ones! 💔🙏🏿
I’m so sorry this happened to you @nipseyhussle pic.twitter.com/rKZ2agxm2a

Our hearts are with the loved ones of Nipsey Hussle and everyone touched by this awful tragedy. L.A. is hurt deeply each time a young life is lost to senseless gun violence. My Crisis Response Team is assisting the families coping with shock and grief.

We (@LAPDChiefMoore and I ) were meeting , at the request of @NipseyHussle with him and @rocnation tomorrow at 4pm to talk about ways he could help stop gang violence and help us help kids. I’m so very sad https://t.co/rcGtvw9c6L

Earlier in the day, Marquesha Lawson sobbed as she recalled Hussle and how he helped the community and was offering to help her daughter's modeling career.

"I was a childhood friend," Lawson said. "I've known him all my life. He was like family to me."

Fan Edgar Cabrera said he admired how Hussle worked his way up from the bottom.

"It hurts," Cabrera said. "And it hurts the community. All these people - we love him."

You were about something..positive and for your community in every chance you had to speak..and because of that You inspired millions..millions who will uphold your legacy forever. rest amongst the stars. 🙏🏾 https://t.co/7gZ795wcQT

Police Commissioner Steve Soboroff said on Twitter he was set to meet with the rapper Monday along with LAPD Chief Michel Moore "to talk about ways he could help stop gang violence and help us help kids."

On Monday morning supporters were still holding vigil outside his store.

Nipsey Hussle was killed and two others were wounded in a shooting at the Los Angeles store owned by the rapper.

Police said Hussle and the two other victims were standing outside the store in the parking lot when the shooting occurred. Police said they are looking for a single male gunman who fled the area, and say the shooting may have been gang-related.

Investigators are talking to witnesses and canvassing the area for surveillance video.

The 33-year-old rapper, born Ermias Joseph Asghedom, grew up in Los Angeles. He was nominated for the best rap album Grammy this year for his debut studio album "Victory Lap."

"It's my debut album so for my first one (to be nominated) out the gate, it's like, it was overwhelming a little bit. It was ... inspiring, humbling," he said in an interview with the Recording Academy on the red carpet of the 2019 Grammys, which he attended with his daughter.

Hussle is survived by two children and fiancee, actress Lauren London, according to AP.

Hussle opened the clothing store in June 2017 at an event that included appearances from NBA players Russell Westbrook, DeMarcus Cousins and some notable rappers.

Police responded to the store for that shooting report on Sept. 14, 2018, but did not find any suspects or victims and witnesses were uncooperative. 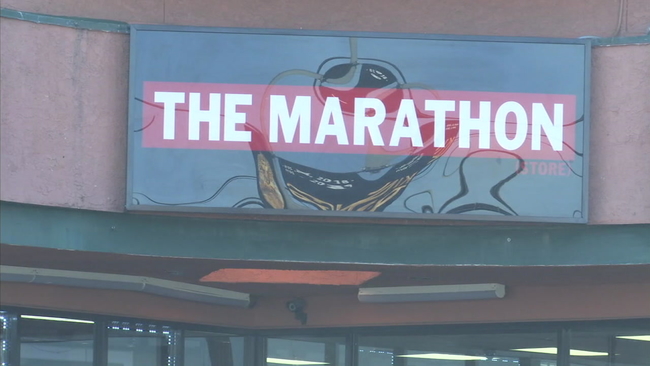