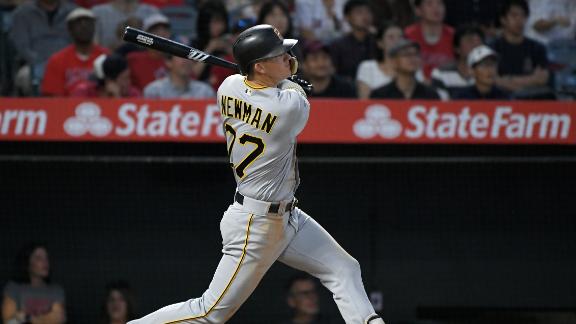 ESPN
ANAHEIM, Calif. -- Mitch Keller was barely a teenager when a hotshot outfielder from downstate New Jersey joined his hometown Cedar Rapids Kernels. Keller immediately became an enormous fan of Mike Trout, and he cheered on the Angels from Iowa while his favorite player rose to the top of their sport.

Keller finally stepped onto the same field as Trout on Monday night, facing his hero three times at the Big A. The Pittsburgh Pirates' top pitching prospect will always remember his first career victory, but one small detail will stand out more than the final score.

"Just to kind of get that head nod from him in the first inning, his first at-bat ... it was a really cool moment for me," Keller said. "I'm sure he doesn't think anything of it, but it was awesome for me."

Keller pitched five resilient innings for his first win in the major leagues, and the Pirates snapped their eight-game losing streak with a 10-2 victory over the Los Angeles Angels on Monday night.

Keller (1-1) came up from the minors to make his fourth big league start, and the rangy right-hander was good enough to win -- particularly with bountiful run support. He yielded five hits, two walks and just one earned run, striking out four and pitching out of two late jams.

He walked Trout twice in a pair of hard-fought at-bats. He also retired the Halos superstar on a fly to right in the third.

"It was incredible," Keller said. "Growing up, I never would have pictured being here like that right now. It feels good to get the first one out of the way. Hopefully many more of them to come. ... It's really cool facing that team. There's a lot of good players on that team, a lot of guys that I grew up watching."

Jacob Stallings had a homer and a two-run double for the Pirates, who won for just the third time in 21 games and only the fifth time since the All-Star break. Despite those recent struggles, Pittsburgh's raucous celebration of Keller's milestone win could be heard well outside the clubhouse doors.

"It was a really good game for Mitch to be involved in, because he's been separate from all of it," Pittsburgh manager Clint Hurdle said. "He was able to come in and put a foot down, and we showed up in the box."

Kevin Newman, Josh Bell and Bryan Reynolds also homered as Pittsburgh jumped to a big early lead on young Jose Suarez (2-4) and the road-weary Angels, who played in Boston on Sunday.

"You don't want him to be too down on himself, because he's only 21 years old," Angels manager Brad Ausmus said. "There's still plenty of time for him to get better. It's a tough line to walk, because you don't want his confidence to be eroded."

Max Stassi drove in his first run for the Angels, but Los Angeles opened a seven-game homestand by losing for the ninth time in 11 games.

Starling Marte had three hits for the Pirates, who have skidded out of playoff contention over the past month. They began their first series at the Big A since 2013 by trouncing a similarly sliding opponent, starting with a three-run first inning.

After Bell drove home the first run with a single, infield errors by Matt Thaiss and Albert Pujols gift-wrapped two more runs while the Pirates batted around.

Pittsburgh added two more runs in the third on Stallings' double down the left field line. Stallings, a 29-year-old catcher with 16 career RBI entering the game, matched his career high with three RBI.

Stassi, the veteran catcher recently acquired by the Angels from Houston, got his first RBI since May 8 with a long fly to center in the fourth.

Stallings homered in the fifth, and Reynolds and Bell both connected in the sixth. All three homers came off Jose Rodriguez, who came up from the minors to make his second appearance of the season for LA.

Pirates: Keller took the roster spot of RHP Richard Rodriguez, who went on the injured list with right shoulder inflammation.

Angels: RHP Justin Anderson went on the injured list with a strained back muscle. ... SS Andrelton Simmons expects to return "soon" from a left ankle injury that has kept him out since Aug. 4. The Gold Glove winner missed nearly six weeks midway through the season with a different ankle injury. Simmons says the Angels are just being cautious this time with an apparently unrelated injury to the same ankle. ... RHP Felix Pena, who combined with Taylor Cole on a no-hitter last month, will have his season-ending knee surgery Friday.

Halos rookie Griffin Canning (4-6, 4.76 ERA) will return from a brief stint on the injured list with elbow inflammation to face Pittsburgh's Trevor Williams (4-5, 5.06 ERA), a Southern California native facing the Angels for the first time.