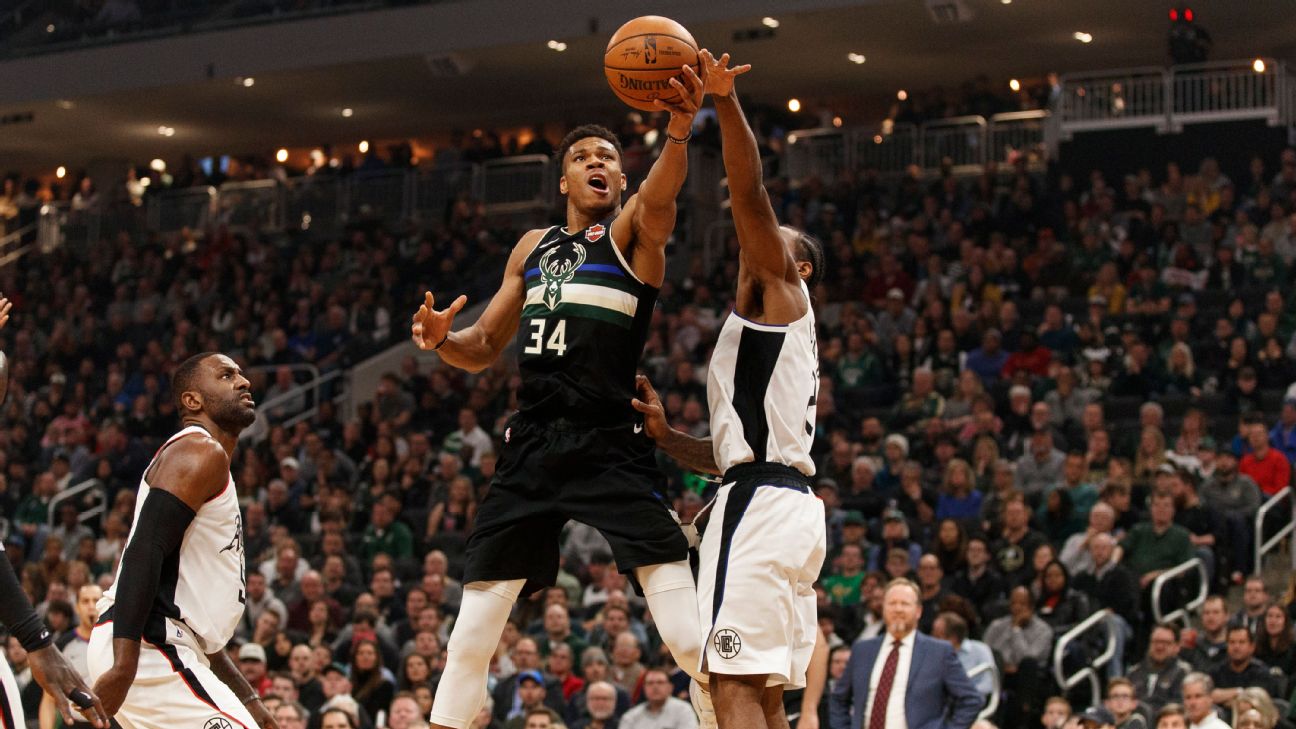 MILWAUKEE -- Doc Rivers emerged from the locker room Friday night and tried to come up with a clever reason for the LA Clippers' worst loss of the season.

"It was Giannis' birthday, and we searched all over the city to find a gift, couldn't find one, so we gave him this one," Rivers said.

On Giannis Antetokounmpo's 25th birthday, the Milwaukee Bucks celebrated by stomping the Clippers 119-91 to win their 14th straight game, the franchise's longest winning streak since 1973.

Antetokounmpo didn't get caught up in the festivities, though. Instead, he went about his work, finishing with 27 points, 11 rebounds and four assists.

The Bucks have won by a total of 137 points over their past four games, which is the second-best point differential over a four-game span in a season in NBA history, according to ESPN Stats & Information research.

The Bucks (20-3) beat the Clippers 129-124 in Los Angeles earlier this season, but neither Kawhi Leonard or Paul George played in that game. On Friday night, it didn't matter as Leonard, George and Lou Williams combined to shoot 15-for-39 while each turned the ball over five times.

The Clippers came into this game having scored 130 or more points five times, reaching 150 twice. But Rivers wanted everyone to know the Clippers' offense isn't nearly as good as the statistics indicate as he tries to integrate Leonard and George amid disruptions due to injuries and little to no practice time.

"We have not maximized them offensively yet," Rivers said of Leonard and George. "We keep looking at our offensive numbers, and I've been saying it: It's fool's gold. We're not ready offensively yet. And our numbers say different. But this is where analytically, I'm right. I can see it."

With just under 10 minutes left in the fourth, Rivers began clearing his bench with the team falling behind 101-67. The Clippers felt the Bucks wanted this game more, and it showed.

"Sometimes you just get your ass kicked," said Williams, who called the loss humbling. "It won't be the last time we get our asses kicked this season."

Before Friday night's blowout loss, in which the Clippers trailed by as many as 41, their largest deficit was 23 against the Jazz on Oct. 30. They also had their worst night of the season on uncontested shots, with 38 percent from the field and 21 percent from 3.

"Obviously, one of our best efforts on both sides of the ball," Bucks coach Mike Budenholzer said. "To do what we did defensively, offensively and just getting closer to 48 minutes of what we want to be.

"I think to come out and throw a great punch in the first quarter, kind of take one in the second quarter, then respond in the third was really impressive. I think lots of guys played well."

Leonard led the Clippers with 17 points and five turnovers on 5-for-14 shooting in his first matchup against Antetokounmpo since last season's Eastern Conference finals, when Leonard was a member of the defending champion Toronto Raptors.

While Antetokounmpo celebrated his birthday in style, the reigning MVP remained focus, even turning down his mother's homemade birthday cake before the tip-off.

Meanwhile, Leonard left Milwaukee with the Clippers' worst loss of the season as he says the Clippers are still learning their playbook.

"We're just a work in progress," Leonard said. "This team is just really kind of put together this year. We've got to figure it out. Some of us don't know the plays coming down, and it's hard to get in our sets. We've just got to keep striving."

Asked about playing with George, Leonard added, "We just have to get comfortable with the plays, just going out there and being able to run it without thinking, getting into our spots early. The flow will come."
Report a correction or typo
Related topics:
sportsespnnewsmilwaukee bucksgiannis antetokounmpola clippersnba
Copyright © 2020 ESPN Internet Ventures. All rights reserved.
More Videos
From CNN Newsource affiliates
TOP STORIES