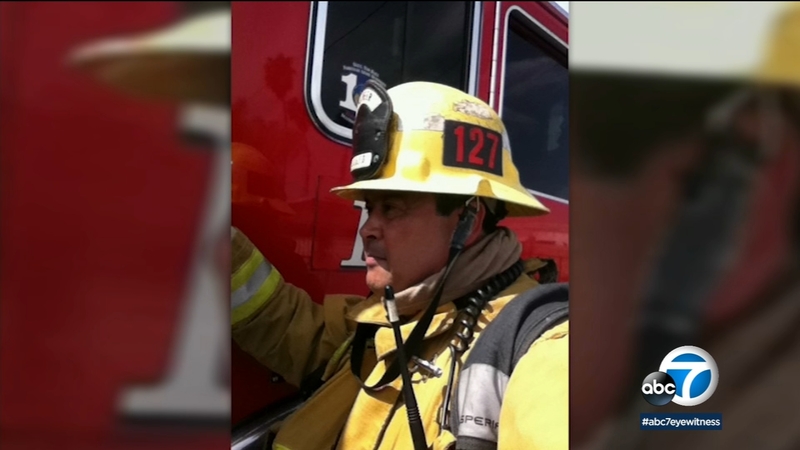 LOS ANGELES (KABC) -- Whether it's a house fire, a car accident, or even a helicopter crash that claimed nine lives, what firefighters see and experience over time can take a toll.

Research shows Post-Traumatic Stress Disorder (PTSD) and depression rates for firefighters can be five times higher than the civilian population. Just last year, more than twice as many firefighters died by suicide than died while on duty. In fact, every year since 2014, reported suicides outpace on-duty deaths for firefighters.

The Firefighter Behavioral Health Alliance actually believes the numbers could be worse. It estimates that only 40% of suicides are reported. If that's true, the 154 reported suicides in 2015 would be closer to 385 nationwide.

"When he went on children, it just tore him up," said Sophia Johnson, widow of Los Angeles County firefighter.

Billy Johnson worked for Los Angeles County Fire Department for over 20 years, earning the Medal of Valor for saving a young girl from a burning building. Sadly, he took his life in 2017.

"He would see every patient that he went on, from the first patient to the last patient. And that list would just grow and grow over the years. And so every time he fell asleep, he would see that," said Sophia.

Rich Tucker's story was different, but had the same ending. A firefighter with Los Angeles City for 18 years, Tucker had a stroke and his doctor told him he would never be a firefighter again.

"He was weeping and said, 'That's what I am, is a fireman. That's who I am,'" said Carol Tucker, widow of a Los Angeles City firefighter.

Stories like these drive the combined efforts of firefighting agencies to better address the mental health of firefighters. For a culture of people who often see asking for help as a sign of weakness, removing the stigma attached to behavioral health is crucial.

"It's been ingrained in us that we are the fixers. We're supposed to fix everybody's problems. The problem is that we have a little bit of a hard time being the one that allows us to be fixed when we have issues," said Capt. Scott Ross, peer support coordinator with LACFD.

Across the country, there is now a proactive approach to mental health through education like a clinic in Arcadia, teaching firefighters what to be aware of to help themselves, and each other.

"It takes a firefighter to talk with another firefighter. And to be able to deliver our service through peers, through firefighters who have received our training? It's the way to be effective," said Dr. Steven Froehlich with Peer Support for LACFD.

"I think if my husband could do that, any of these firemen could do it," said Carol.