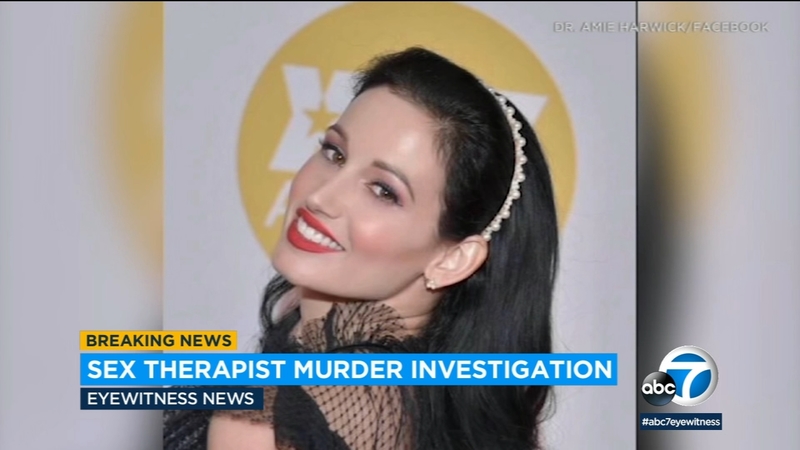 Gareth Pursehouse, a 41-year-old resident of Playa del Rey and a former boyfriend of Harwick, bonded out of jail just before 10:30 p.m., according to the Sheriff's Inmate Information Center. He was being held in lieu of $2 million bail.

Harwick, who was once engaged to "The Price is Right" host Drew Carey, had a restraining order against Pursehouse until two weeks ago, when it expired, Los Angeles police said.

New details are emerging about the murder of well-known sex and family therapist Amie Harwick, who was killed at her home in the Hollywood Hills.

LAPD arrived to Harwick's home Saturday in the Hollywood Hills at about 1:16 a.m. and found her beneath a third-floor balcony with injuries consistent with a fall.

Pursehouse was arrested later that afternoon at his home in Playa del Rey.

Coroner's officials on Tuesday released the official cause of Harwick's death. She died of blunt force injuries to her head and torso after being transported to a hospital, according to the Los Angeles County office, which described the incident as a homicide.

One of Harwick's friends said Pursehouse was "a stalker" who "didn't take it well at all" when the couple ended their previous relationship.

Friends and clients of Harwick launched a new online petition on change.org calling for changes to domestic violence laws to provide more protection for victims. Supporters want to eliminate time restrictions on restraining orders, so they only expire upon request. They also want to give victims the power to file a restraining order without having to face the defendant in court. According to the National Coalition Against Domestic Violence, one in seven women will be stalked in their lifetime and will feel at some point that they will be severely harmed or even killed.
Report a correction or typo
Related topics:
hollywood hillslos angeleslos angeles countymurderhomicide investigation
Copyright © 2021 KABC-TV. All Rights Reserved.
TOP STORIES
Some SoCal cities see record temps during heat wave
Brush fire erupts at Irwindale recreation area
LA seeing lowest COVID-19 rate of U.S. metro areas
Newsom picks 10 winners of $15M to celebrate reopening
Senate passes bill making Juneteenth a federal holiday
Is being vaccinated a requirement for returning to work?
California reopens today - what changes?
Show More
LA's iconic restaurant Langer's finally reopens for in-person dining
SoCal nonprofits benefiting from MacKenzie Scott donations
Southwest deals with second day of outages, cancellations
UC will require students, faculty and staff to be vaccinated
3,000 unruly passengers so far this year -- 2,300 cases over mask wearing: FAA
More TOP STORIES News