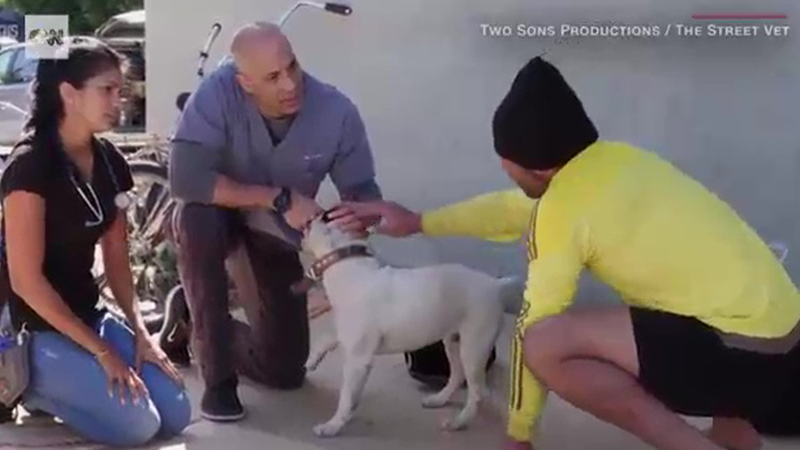 CALIFORNIA (KABC) -- For the last nine years, Dr. Kwane Stewart has spent his free time as a veterinarian treating pets on California's streets for free.

The 49-year-old drives around the state helping the animals of people experiencing homelessness, providing everything from flea treatments to vaccinations and more.

Before he eventually became known as "The Street Vet," Stewart ran an animal hospital and went on to be the county veterinarian for Stanislaus in Modesto, California, according to CCN. But when the financial crisis hit the U.S. in 2008, he was inspired to do more.

"That was the moment for me career-wise that was enlightening. Up until then, I'd been practicing high-end medicine for clients who could pay for everything," Stewart told CNN. "But suddenly I was thrown into this economic war and people couldn't even afford to help their pets."

As the homeless population grew, so did the number of pets on the street.

In 2011, he set up a soup kitchen and offered a check-up to any pets that were brought in and before he knew it, there was a long line of people waiting for treatment for their pets.

Some of the common illnesses he treats include allergies, skin and ear infections, bad teeth and even arthritis.

For simple treatments, Dr. Stewarts pays out of pocket and raises money through a GoFundMe page for more severe cases that require surgery or further treatment at a hospital, which can cost pet owners thousands of dollars.

Stewart spends much of his free time walking around areas such as Skid Row and downtown San Diego in search of homeless pet owners who could use a helping hand. He estimates that he has helped around 400 animals since he became "The Street Vet."

"I know that pets are reliant on people but I think people are even more dependent on their pets. They love for them and care for them and it's genuine," he said.
Report a correction or typo
Related topics:
pets & animalscaliforniahomelesspetsveterinarian
Copyright © 2021 KABC-TV. All Rights Reserved.
More Videos
From CNN Newsource affiliates
TOP STORIES