In her ruling, the federal judge said delaying the release of children in facilities with known COVID-19 exposure threatened their safety.
KABC 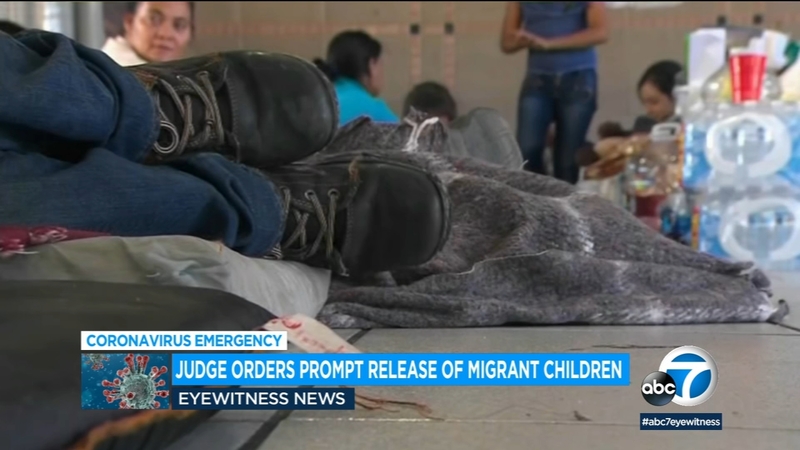 LOS ANGELES (KABC) -- A Los Angeles federal judge last week ordered the government to "make every effort to promptly and safely release" the thousands of immigrant children in custody who have suitable guardians.

U.S. District Judge Dolly Gee found that U.S. Immigration and Customs Enforcement and the Office of Refugee Resettlement violated a 1997 agreement that guarantees all immigrant children the right to safe and sanitary conditions of detention. The agreement also dictates that they should be released to sponsors living in the United States.

In her ruling, Gee said delaying the release of children in facilities with known COVID-19 exposure threatened their safety.

Gee added that the government violated the settlement, commonly known as the Flores agreement, by not releasing minors without unnecessary delay. She ruled that the entities refused to release minors to some relatives unless the relatives were first fingerprinted and kept the children in custody even though their legal proceedings were ongoing and therefore could not be deported.

In her ruling, Gee quoted Dr. Julie DeAun Graves: "Postponing the release of children in facilities with known COVID-19 exposure is like leaving them in a burning house rather than going to rescue them and take them to safety."

The judge also ordered reports from court-appointed juvenile coordinators detailing the government's compliance with recommendations from the Centers for Disease Control and Prevention as well as plans to identify and protect children who are at higher risk of serious illness from the virus. A follow-up hearing is scheduled for May 22.

The nationwide order was issued at the request of the Center for Human Rights and Constitutional Law, a Los Angeles-based human rights organization that filed the suit leading to the Flores agreement.

Peter Schey, one of the attorneys who filed the original lawsuit in 1986 and continues as co-lead counsel in the case, said Friday's ruling "simply requires the government to comply with an agreement it reached with us in 1997 by providing children with safe detention conditions and prompt family reunification with relatives living here.''

President Donald Trump has denounced the Flores agreement and is trying to reverse it on appeal after Gee denied a government request last year to terminate the agreement based on new regulations the administration issued surrounding the detention of children.