NC flooding: Search continues for boy, 4, swept up in waters as body of 5-year-old found 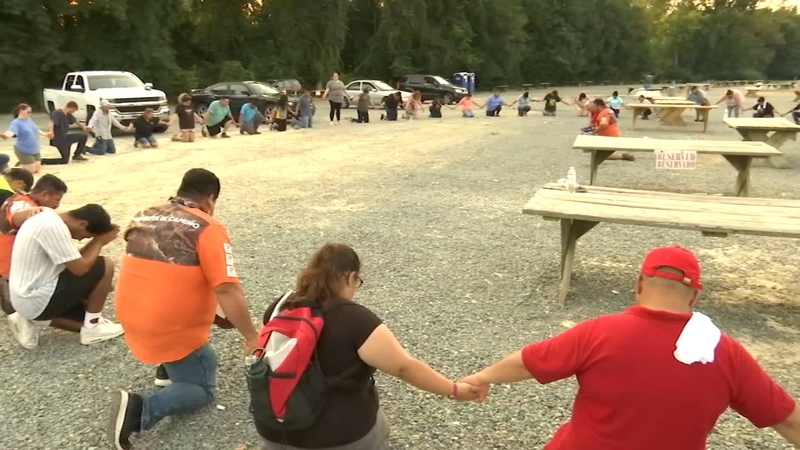 Deputies searched for 17 hours on Tuesday and continued all day Wednesday.

After the sheriff's office notified the group about 5-year-old Alexa's body being found in a creek around 5:30 p.m., they rallied together and held several prayers together, including a massive prayer circle where they asked God to help deputies find 4-year-old Abraham.

Others stopped by to provide food, water, and words of encouragement to family and loved ones.

"For us to find a body is a success but it is not a success we were hoping for," Johnston County Sheriff Steve Bizzell said.

"For us to find a body is a success but it is not a success we were hoping for," Johnston County Sheriff Steve Bizzell said.

Nancy Martinez, the cousin to Abraham's father, says it's been an emotionally taxing day.

"I got kids of my own, you know, what can you think? We're still hoping and praying we find Abraham before the night is over," Martinez said.

After deputies suspended the search for the evening, community members organized and began conducting their own searches of the surrounding bodies of water. Unfortunately, they were unable to find Abraham.

The group plans to continue their search at 6 a.m., while the sheriff's office will be back on the water at 7 a.m.
WATCH: JOHNSTON COUNTY SHERIFF GIVES UPDATE ON SEARCH AND RESCUE MISSION
EMBED More News Videos

Bizzell said his deputies searched for 17 hours on Tuesday and will put in another full day on Wednesday.

Earlier in the day, Donna Mitchell led a prayer circle with family and neighbors on Wednesday.

"All I could think about was it being my children, my grandbabies," she said. "And it breaks my heart to know that this mother is going through all this pain. And just to know, what if it was your child?"

The tragedy happened Monday into Tuesday when heavy downpours blanketed much of central North Carolina.

A mother and her two children were driving down Galilee Road when water caused part of the road to collapse. Their car was then swept away.

According to Smithfield Fire Chief John Blanton, rescue crews arrived and were able to get the mother and one child. However, while they were in a recovery boat headed back to safety, the boat capsized.

Three other recovery boats capsized before the crews got themselves and the mother to safety.

"The water was so raging the other night, it was throwing the boats up against the trees," Bizzell said. "We're fortunate that we had no loss of life for first responders the other night."

The creek feeds into the Neuse River, which was in a moderate flood stage at 11 a.m. Crews were searching the river as well. Temperatures are expected to get well into the 90s with heat indices into the triple digits, making the search effort more difficult.