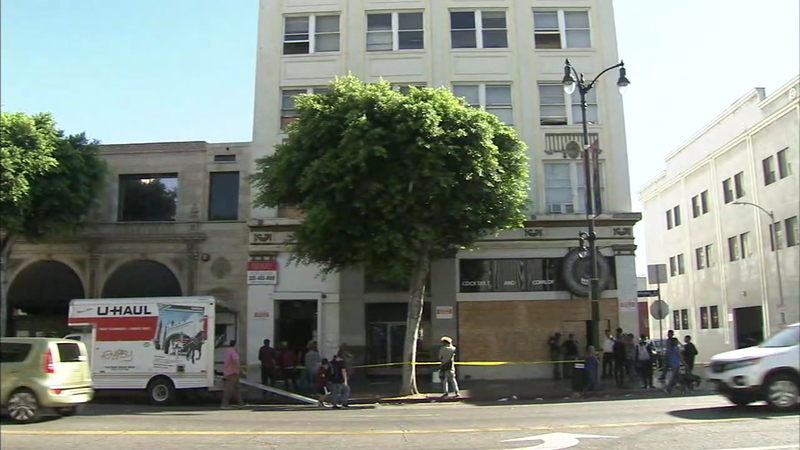 The operation began about 3 a.m. in the 6300 block of Hollywood Boulevard, which was closed in both directions amid a heavy police presence.

"That building was not supposed to be occupied and the property owner was aware of that," said Detective Meghan Aguilar, a spokeswoman for the Los Angeles Police Department.

With no electrical service at the location, she said, "people were running wires so that they could have electricity - but we know how dangerous that is."

Officers cleared the structure floor by floor and recovered a shotgun and a rifle, according to the detective.

Police escorted the detained individuals to another location, where their identification was processed and they were cited for trespassing.

"If they have any warrants they'll be booked on those warrants," Aguilar said.

Resident Tray Bucket said he was woken up at 3 a.m. by authorities and get out of the building. He said he'd been leasing a room for a business for almost two years.

"There's people that's been inside that building for over seven years. Me, personally, I was using this as my business space. I have a film company," he said.

He added that when he showed authorities his lease agreement - they said it wasn't legal.

"Found out on the lease that they were bogus. So when they detained us at the police station, they said all of that is null and void," Bucket said.

Drugs and weapons have been sold in and around the building, which investigators have been monitoring for the past two months, the LAPD said.

Ramsey Barton said she and others who were living inside the building were paying rent and thought they had a legal right to be there.

"Somebody was getting paid for it," she said.

Authorities said the building is uninhabitable and has raised safety concerns. Police said their job was to go in, clear the building out and prevent another tragedy similar to the Ghost Ship in Oakland.

By Wednesday afternoon, security officers remained near the front entrance so that people would not attempt to get back into the building.

Eyewitness News called the listed owner of the building for comment, but did not receive a response.