8 injured during knife rampage at historic site in Jordan 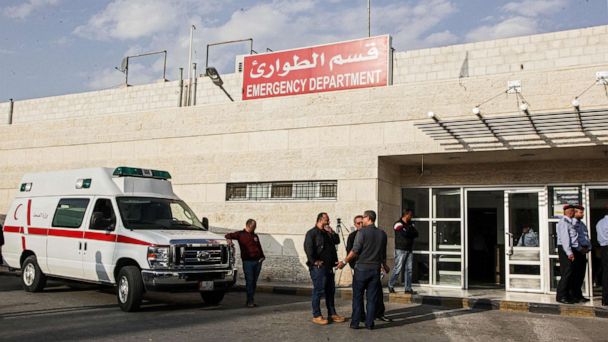 Beirut, Lebanon -- A man is under arrest for allegedly knifing eight people, including four tourists and two police officers, at a popular attraction in Jordan on Wednesday, sources from the Jordanian General Security confirmed to ABC News.

As dozens of tourists were visiting the ancient city of Jerash - one of the world's best preserved Roman ruins - a bus driver, a tour guide and four tourists from Mexico and Switzerland were viciously slashed.

A video posted to Twitter purportedly shot in the immediate aftermath of the attack in Jerash showed a bloody scene, with one woman lying face down on the ground while receiving aid to a wound to her back. Also captured in the video that was viewed more than 34,000 times as of Wednesday morning there was a badly injured man and a woman heard asking for help in Spanish: "It's a dagger, it's a dagger, there is a knife. Please, help him now!"

The knife attack ended as two police officers wrestled the alleged slasher to the ground. Both officers were also cut during the take down.

There was no immediate information about the alleged assailant.

One of the officers and a Mexican tourist were listed in serious condition and helicoptered to a hospital 30 miles away in Amman, authorities said. The remaining injured were reportedly in moderate condition.

There was no motive for the attack and the case is still under investigation.

Jerash saw a jump in tourist visits of more than 16 percent in the first two months of this year alone, said Ziyad Ghunaimat, the director of the Jerash Department of Antiquities.

Before Wednesday's attack, the most recent threat to Jordan's tourist trade came in August, when a dispute between two people living near the historic city of Petra erupted into gunfire. An unidentified man opened fire on a bus, but no passengers were on board and no one was hurt, state news agency Petra said.
Report a correction or typo
Related topics:
abc newsnational
Copyright © 2020 ABC News Internet Ventures.
More Videos
From CNN Newsource affiliates
TOP STORIES