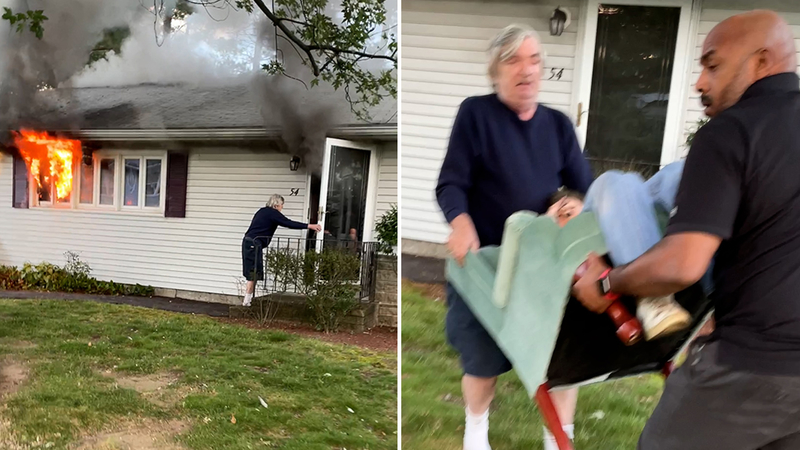 Bystanders carry 97-year-old out of burning home on chair

One of the woman's rescuers went into cardiac arrest immediately after helping carry her out on a chair but is expected to recover, WMUR, the local ABC-affiliated station, reported.

Lariana Garvis, the woman who recorded the video, told WMUR she noticed flames while driving by the house fire in Nashua, southern New Hampshire.

She said another driver and a neighbor kicked in the burning home's front door and rushed out carrying the woman.

"Stay right there. Don't move," one good Samaritan is heard telling the woman as he drags the chair out the front door.

"We got you. We got you," Garvis is heard assuring the woman, who is conscious and alert.

The 97-year-old then asks about her dog, and a third bystander indicated that her pet was safe.

Soon after, one of the rescuers collapsed.

"I realized my phone was still in my hand, so I just tossed my phone and instantly started compressions," Garvis told WMUR. "I didn't stop. I kept talking to him. I said, 'Listen, man, you just saved her. You're not dying.'"

Garvis continued to perform CPR until emergency responders took over. Firefighters said he went into cardiac arrest, but Garvis has since talked to him and said he's recovering.