"Where they see some sort of property damage being done, does not give them the right to use less-than lethal weapons on the entire crowd," said Assemblywoman Lorena Gonzalez (D) San Diego, who is sponsoring the bill.
KABC
By Carlos Granda 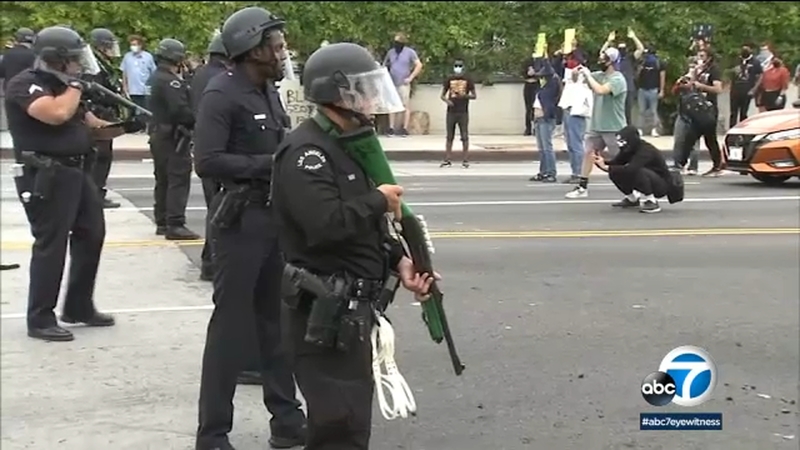 CA bill could limit use of tear gas, other less-than lethal weapons

During recent protests we saw people on the streets running from tear gas. New bill AB 66 would ban police from using this on crowds and restrict the use of less-than lethal devices such as rubber bullets and beanbags.

Assemblywoman Lorena Gonzalez (D) San Diego is one of the sponsors of the bill.

"Even when it's used, this bill would require a couple of things beforehand. First of all, they would have to be a threat to an actual person. Law enforcement would have to try de-escalation first," says Gonzalez.

Protesters gathered in downtown L.A. for another night of demonstrations against police brutality following the Kenosha, Wisconsin police shooting of Jacob Blake.

Leslie Furcron says she was at a protest and was hit in the head by a beanbag round.

"I want to make sure people understand that it was not a beanbag like the one the kids play with, this was a small bag of fabric filled with lead pellets," says Furcron.

Protesters say they are exercising their First Amendment right. Law enforcement experts say they are there to protect that right.

The LAPD released video of an incident involving a man who accuses the department of striking him in the head with rubber bullets during a protest.

"To be able to work with them throughout their march and have people along the way to make sure the marchers are safe and that the public is allowed to continue and go about their business," McDonnell said.

McDonnell said often times, others intentionally mix in and are there to cause trouble.

"They stand often times behind the legitimate protesters and they'll toss things over the crowd at police. The officers then are dealing face-to-face at ground level with relatively peaceful protesters but behind them are the ones that are causing much of a problem in many of the cases that we've seen around the country," McDonnell said.

At a news event this week, Assemblywoman Gonzalez said destruction of property is not enough to use these weapons to disperse a crowd.

"Where they see some sort of property damage being done, does not give them the right to use less-than lethal weapons on the entire crowd," Gonzales said.

If the bill passes, law enforcement agencies would need to abide by these standards starting Jan. 1 of next year.

A Marine Corps veteran is recovering after he says he was seriously injured by police rubber bullets during Saturday's protest in the Fairfax district.

Many peaceful protesters who marched at demonstrations earlier this week in Southern California are now speaking out and tell ABC7 they were treated poorly after being arrested.